Efforts to recall Oakland mayor Jean Quan after less than one year in office are pathetic charades. Lots of people on the “left” and “right” are angry with Quan. But does anyone have a good narrative as to why a recall will lead to long-term superior outcomes for Oakland? Note I didn’t vote for her (not as my 1st, 2nd, or 3rd choice) and have low expectations for the remainder of her term. But:

It seems to me that at the level of district- and city-wide politics, the civic culture of Oakland is impoverished. Residents should put their efforts into building that from the ground up rather than helping cargo cult recall campaigns. Sure, a lot of that will involve “fighting city hall” in all of the ways that can be done without another election. Perhaps this can lead to future mayoral and council elections that do not solely feature a rouge’s gallery of idiots, liars, and stooges as candidates.

A complaint I’ve seen in a number of articles is that Quan “has not specified the areas of focus in her 100-block crime-fighting plan”. But they look clear in a map excertped from a presentation on the plan. 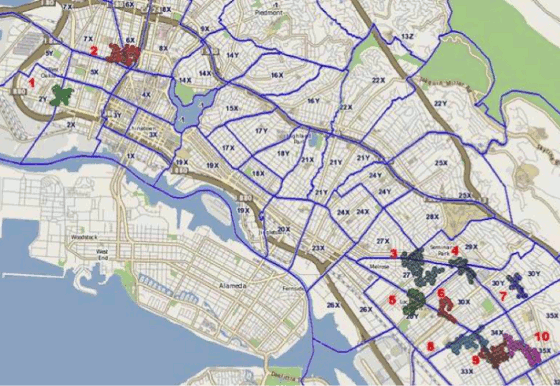 Note that the area labeled “2” is immediately adjacent to highway 980, which ought be demolished.