In 1939 and 1940, the American Society of Composers, Authors and Publishers (ASCAP) greatly increased its licensing fees. Broadcasters for a time played only music in the public domain and that licensed from Broadcast Music, Inc. (BMI), a competitor to ASCAP they set up. ASCAP’s monopoly was broken, some genres that had been ignored obtained airplay. I’ve also seen this described as a failed ASCAP boycott of the broadcasters. I have not read beyond sketches to know the best characterization, but there were a small enough number of entities on both sides that either or both could hold out, and effectively “boycott” for a higher or lower price.

A new pledge to not do one or more of publishing in, reviewing for, or doing editorial work for journals published by Elsevier has gotten a fair amount of notice. 7,671 researchers have signed, which has probably already led to some Elsevier concessions and a drop in their share price.

Academics are not nearly as concentrated as U.S. radio broadcasting in 1940, but hopefully, and just possibly this boycott will lead to lasting change (the share analyst quoted in link above does not think so). But pledges to not contribute to non-Open Access journals are nothing new — 34,000 scientists (pdf; has anyone counted how many have stuck with the publication part of the pledge?) signed one in 2001…

but the publishing landscape remained largely unchanged until PLoS became a publisher itself to affect change. PLoS therefore reinvented itself as a publisher in 2003 to show how open access publishing could work.

With the continuing campaigns for Internet-censoring litigation such as SOPA and PIPA, and the closure of sites such as Megaupload under allegations of ‘piracy’ and ‘conspiracy’, the time has come to take a stand against music, film and media companies’ lobbyists.

The only way to hit them where it truly hurts… Their profit margins.

Wait the 4 weeks to buy them in April, see the film later, etc. Holding out for just 4 weeks will lave a gaping hole in the media and entertainment companies’ profits for the 1st quarter. An economic hit which will in turn be observed by governments worldwide as stocks and shares will blip from a large enough loss of incomes.

This action can give a statement of intent:
“We will not tolerate the Media Industries’ lobbying for legislation which will censor the internet.”

Nice sentiment. Not purely a tiresome rearguard action. But I don’t see how it can conceivably make a noticeable impact on copyright industry profit margins. Getting a fair number of people to contact their elected representative is noticeable, as usually few do it. A significant proportion of the world’s population pays something to the copyright industries. To make the stated difference, a much larger number of people would have to participate than have in SOPA and ACTA protests, and the participation would require a relatively sustained behavior change, not a few clicks.

Still, perhaps “Black March” will be useful as a consciousness-raising exercise; but of what?

I’ve seen some suggest (especially in Spanish, as the linked post is [Update 20120304: English translation]) that the “what” needs to include making, using, and sharing free works. I agree. 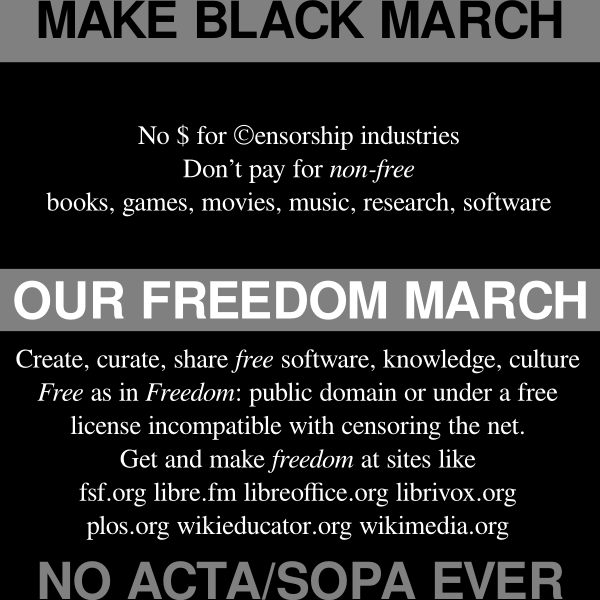