Ride- and car-sharing and computers 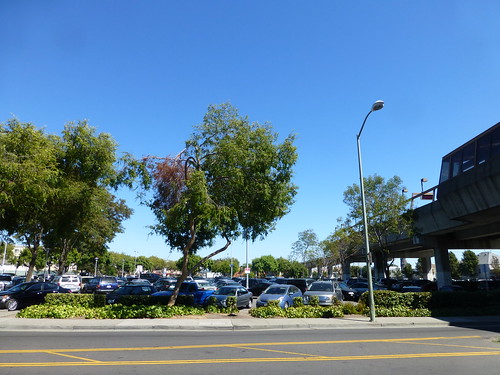 Underemployed vehicles and land at Fruitvale BART parking lot, the 5th of 11 stations between me and Fremont.

Tuesday I attended Silicon Valley Automotive Open Source presentations on Car- and Ride-sharing. I heard of the group via its organizer, Alison Chaiken, who I noted in February gave the most important talk at LibrePlanet: Why Cars need Free Software.

The talks were non-technical, unlike I gather most previous SVAOS talks (this was the first event in Fremont, which is much more convenient for me than Santa Clara, where most previous talks have been held), but very interesting.

I did not realize how many car- and ride-sharing startups and other initiatives exist. Dozens (in Germany alone?) or hundreds of startups, and all manufacturers, rental companies, and other entities with fleets are at least thinking about planning something. That seems good on its own, and will provide good experience to take advantage of further more intensive/efficient use of vehicles to be enabled by robocars.

Carpooling and other forms of ride-sharing has gone up and down with fuel rationing and prices. Carsharing seems to go back to 1948 at least, but with slow growth, only recently becoming a somewhat mainstream product and practice. Ride- and car-sharing ought be complements. Sharing a taxi, shared vans, and even mass transit, could in some ways been seen as primitive examples of this complementarity.

Rationing is not in effect now, and real prices aren’t that high, so I imagine current activity must be mostly be a result of computers and communications making coordination more efficient. This is highlighted by the reliance and hope of startups and other initiatives on the web and mobile applications and in-car computers and communications for access, control, coordination, reputation, and tracking.

But none of this seems to be open source at the end-user service/product level. Certainly much or even most of it is built on open source components (web as usual, auto internals moving that way). These seem like important arenas to argue against security-through-obscurity in vehicles and their communications systems, and to demand auditability and public benefit for public systems in various senses (one of the startups suggested marketing their platform to municipal governments; if reputation systems are to eventually mediate day-to-day activities, they need scrutiny).