I initially installed Ubuntu Linux 5.10 on my new Dell Inspiron 6000 in November, 2005. I fully expect it to begin having assorted hardware problems this year with the amount of use I give it, though hopefully using an external keyboard (excellent, and only $4.99) and mouse at work will extend its life.

I upgraded to 6.06 shortly after its release but didn’t get around to blogging it. I encountered two problems:

I didn’t upgrade to 6.10 upon release, mostly because I just didn’t get around to it. I saw a couple days ago that 7.04beta is out, so I finally upgraded to 6.10. The upgrade process went without a hitch, but resume from suspend-to-memory was broken again. I’m sure there’s an easy fix, but I decided to take the plunge and upgrade to 7.04beta.

Everything now works, though as Brad Templeton notes the upgrade process stopped several times, waiting on my answers to unnecessary questions. Apart from this annoyance, which hopefully will be fixed before 7.04 gets out of beta, I remain impressed with Ubuntu and how it is progressing. I’m also reminded of how rapidly free software projects are doing new feature releases. I don’t think there are any visible applications I use on this laptop that haven’t been significantly improved in the last 17 months.

I’m not going to link to any offenders, but my consistent observation is that nearly all “citizen journalism” sites fall somewhere between spam blog and crappy community of suckers. If you feel the urge to provide people with a platform to “do” community journalism, don’t. You’re not needed (see below). If you really, really must go ahead, read Evan Prodromou’s seven rules for commercial wikis (which apply to any community site) seven hundred times, then think about it for a long time.

If working for a new project of a startup-like nonprofit in San Francisco involving [open] education, [copyright] law, and [semantic web] technology, perhaps you should look into applying for Executive Director of CC Learn. I could imagine an education, legal, or technology person with some expertise and much passion for the other two working out.

Student programmers, Creative Commons is participating in Google Summer of Code as a mentoring organization.

It is too late to apply for a summer technology or “free culture” internship, but keep CC in mind for next summer and (possibly) this fall.

Update 20070409: There are three open positions in addition to CC Learn ED above:

Do you like the concept of free speech on the web? 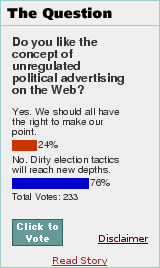 The article linked from the poll concerns a video mashup of Apple’s 1984 advertisement with Hillary Clinton as Big Brother and Barack Obama as Apple.

Fortunately the article does not mention calls to suppress speech, but they will doubtless come as this form becomes more important and opportunists see polls such as the above. It may have been possible to suppress speech in the broadcast media without tremendous collateral damage. On the net, I doubt it.

Hillary 1984 works about as well as the original and captures Clinton saying nothing. But neither ad works for me — both scream “same as the old boss.” The woman with the sledgehammer needed inside help to get so close and is either part of an elite faction or the dupe of one. Apple is just another proprietary vendor and I’m sure Obama can say nothing as well as any politician.

For the record I prefer Obama over Clinton though Bill Richardson is my preferred Democrat candidate for temporary dictator of the U.S.

I hate John Edwards (the whine plus the drawl really gets at me), but in truth it’s a narrow field.

The panelists on After Bust 2.0: Ten Years Later, Where Will We Be? had some interesting things to say, but I only recall that the CEO of Ning was the only panelist to offer an opinion on whether we’re heading into another .com bust (she said no; I agree). I did not note any ten year speculations for the web or anything else, though I could have missed them. Perhaps wise, considering that Google was still a research project in 1997.

I am pushing to make add-on installation not require a restart in Firefox 3, and I intend to help improve and promote GreaseMonkey security in the Firefox 3 timeframe too.

Please do! Drop all other Firefox 3 features if necessary.

And from Eich’s sixth slide:

Working with Opera via WHATWG on <video>

I’ve barely thought about <audio> and <video> but if their presence could encourage non-obfuscated media URLs I’m predisposed in their favor, but universal deployment of unencumbered audio and video decoders via browsers would be excellent.

Monday afternoon’s packed The Growth and Evolution of Microformats didn’t strike me as terribly different from last year’s Microformats: Evolving the Web. Last year’s highlight was a Flock demo, this year’s was an Operator demo.

My capsule summary of the growth and (not much) evolution of Microformats over the past twelve months: a jillion names, addresses, and events have been marked up with hCard and hCalendar formatting.

I attended The Digital Ethnorati panel because I noticed Mini Kahon, whose employer shares an office space with mine, on the program.

So who are the Ethnorati? As one slide put it, those who are colored+hip+wired, where hip translates to identifying as ethnorati (Om Malik was presented as an example of non-ethnorati, despite presumably qualifying as colored and clearly qualifying as wired — too establishment, contrasted with Anil Dash, who gets cool points for being political).

Another term introduced (to me) by the panel is “digital exclusion”, an attempted reframing of “digital divide”. I expect this term to gain far more traction than Ethnorati. The nice thing about “exclusion” is that it can’t be “bridged” merely by obtaining net access; rather power structures must change, as the power structures represented on the net are more or less the same as those represented off the net. So the lingo has great staying power and does excellent worldview fitting.

Digital ethnorati almost by definition are part of power networks (again, wired doesn’t just mean digital) — so how can the digitally (and otherwise) excluded connect or grow their own? In small part by learning to podcast and acquiring other “21st century skills.”

I drifted during the part of the panel presented by a representative of the “Center for 21st Century Skills” and a few high school students who participate in the program, until one of the students, videoconferenced in from Brazil, apparently started crying. I gather that student could no longer participate in the program because she had been deported from the U.S. Now there’s exclusion.

SXSW: Some aggregate figures behind some web apps

Monday morning’s Barenaked App: The Figures Behind the Top Web Apps featured representatives of five companies that run five or so web apps, but not “the top web apps” by any form of wild exaggeration.

I’ll give you an overview of the overview: The five apps cost (in terms of money spent anyway) to build ranged from $20k to $200k and monthly ongoing costs range from $3k to $150k.

You could read the slides for a bit more detail, but you’d miss out on the folk wisdom dispensed. Guess you’ll have to wait for the podcast.

Posted in Peeves, SXSW | No Comments »

The Future of JavaScript ran through almost all of the new features in JavaScript 1.7, all of which are nice for programmers but probably won’t be widely used on the public web for a long time (until use of browsers that don’t support JavaScript 1.7 is negligible).

However JavaScript is being used lots of places now apart from web browsers and giving JS features programmers expect places it well to be the default glue and application language for the next decade on the web, desktop and the server. Where is server side JavaScript? from July 2005 continues to be one of the most viewed posts on this blog. Many people are thinking along these lines, including the first Q&A for this session.

Posted in Programming, SXSW | No Comments »