A prospective, from memory, high level summary of trends in Free/Libre/Open Source Software, in the last 37.5* months:

Design. Many major free software projects have turned in some form to design[er]-driven UX/UI/look-and-feel/etc. Not all (any?) are acclaimed successes yet, but in a few years “open design” may go from paradoxical to hot.

Diversity. Lack thereof has become recognized as a major impediment to FLOSS potential. Existing cultures will change as participation expands and vice versa.

Distributed version control systems. Have changed the way many developers and projects work.

Governance. “Open by rule” governance that treat all participants equally and are run transparently has become recognized as a crucial part of making FLOSS FLOSSY, in addition to (and congruent with) FLOSS licensing. However, some advocate for corporate (usually) controlled projects in order to obtain corporate resources for FLOSS development. GPLv3 has seen strong uptake.

Mobile. Unlike the desktop a mostly free system (Android) is very popular, but also unlike the desktop, mobile devices with approaching 100% FLOSS[Y] software more or less don’t exist. The “appstore” phenomena is recognized as a threat to FLOSS, but it is totally unclear how that will play out.

Net services. Apart from Wikipedia, none of the dominant services people access through the web are free software. Most are largely powered by free software, and companies that run the services contribute much to back-end software, but the services users directly access are proprietary and centralized, with no interoperability among them. FLOSS and federated social web services have made strides but there is much significant technical work to do, and the network effects of the dominant proprietary services are daunting.

Open web. In 2008, Firefox 3 had just been released and Flash was ubiquitous. The “open web” is in much better shape now. It is the platform with the most innovation, is almost entirely based on open standards. As of fairly recently, the prognosis even for open web video looks good. One of the leading browsers, Firefox, is free software, and the free software WebKit renderer powers most others, while IE slowly declines.

I’ve surely missed things, some intentionally (patent threat), some out of partial ignorance (e.g., I don’t have any sense of how much has changed in the last 3 years for FLOSS as a grant, procurement, regulatory, or other “policy” requirement, but know it could be important).

*37.5 months ago Creative Commons held its previous global meeting. Another will be held next week. I’m organizing 2.33** sessions, one of which will touch on movements near Creative Commons (“Where are We?”) and another of which concerns these in depth (or as much as is possible in 80 minutes; “CC’s Role in the Global Commons Movement”).

The CC-specific parts of these sessions will be fairly detailed and for the first one, possibly more interesting to insiders (many of the participants have been involved in CC affiliate projects for most of CC’s history).

I’d also like to convey, perhaps in as little as one slide, the big trends of the last 3 years in a few related areas, without any details. These areas and their trends lead, inform, reinforce, and depend on CC’s work in varying measures, so I think the CC community should understand them at a high level at least, such that the most relevant can be more closely learned from or cooperated with.

**I’m also organizing 1/3 of a session on issues to consider for version 4.0 of the CC license suite; the part I’m organizing concerns the non-commercial clause used by some of those licenses. I promise it will be much more fun than a report on that topic. 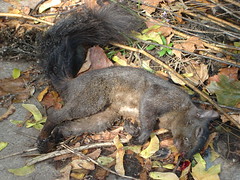 Killing bad products is essential to the health of a product line. “Bad” might mean defective, poor fit, or even merely unpopular.

I’m happy to report again that Creative Commons is retiring two little used licenses, with a fairly thorough explanation of the history and problems of those bad products.