Someone created this Bush eye chart, found at antiwar.com: 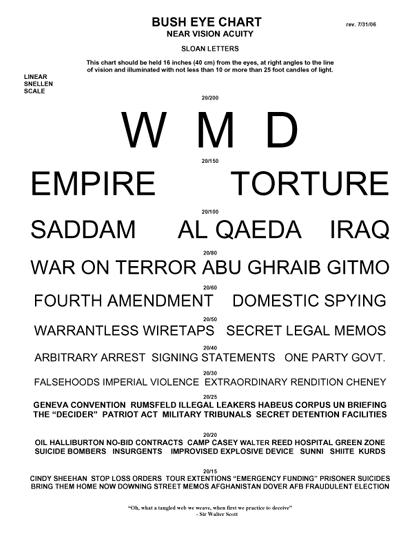 Fun idea, though one obvious “word” is missing, and eye charts look old fashioned (nothing wrong with that), so I turned it into a fake tag cloud, with the missing excuse date word: 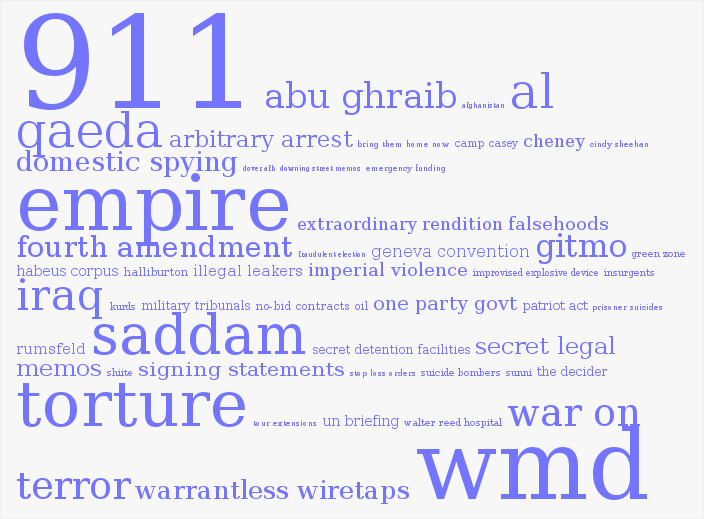 Click the tag cloud to create your own fake tag cloud.

Of course I shouldn’t have been surprised. Wikipedia content should more or less mirror that of the Internet, media in general, and human thoughts and conversation: sex is big, but not dominant.

I haven’t looked at a normal encyclopedia in ages, but I suspect sex would be seriously underrepresented.

Now I want to know whether Arabic Wikipedia has articles on sex (there is currently no interlanguage link to the Arabic Wikipedia from the English Sex article) and if so are they relatively even more popular than their English counterparts. If not I smell opportunity for Arabic-literate Wikipedians.

Last week the NYT ran a story on an exhibition of “International Holocaust Cartoon Contest” “winners” in a Tehran gallery. The reason for this exhibition is supposedly to highlight hyprocrisy “that in the West it is all right to insult religion but impermissible to question the Holocaust.”

If that were true it would be an improvement: the Times article includes a photo of three of the “winning” cartoons. The Times has never printed the Jyllands-Posten Muhammad cartoons as far as I know.

But some Iranians have demonstrated, rather weakly, that they support the idea of free speech and consider allowing some speech and prohibiting other speech hypocritical. The obvious next step is for these same to prove that they are not hyprocrites by displaying the Muhammad cartoons. However, I expect they’ll need to be egged on, and here’s an opportunity for an enterprising gallery owner elsewhere — put in an offer to run the IHCC show, preferably alongside the Muhammad cartoons and Holocaust photographs. Gallery owners, imagine the free publicity! 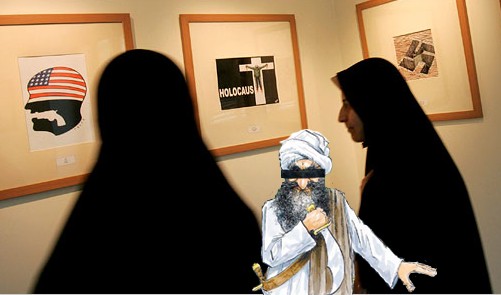 I learned one interesting thing from the NYT story. There is a Jewish member of the Iranian parliament.

How to end the Jewish jurisdiction in a generation or less

Or demographics of the southern Levant:

Religious breakdown: 4.9m Jewish (of which half are “secular” and one quarter non-believers), 1m Muslim, the rest Christian, Druze, or unclassified.

Population of the West Bank and Gaza: 3.5m

Muslim birthrates are considerably higher than those for other groups.

There appears to be lots of debate about all of these numbers, take them as approximations. With that caveat, consider that in the territory the jurisdiction of Israel controls or has military dominion over (Israel proper, the West Bank and Gaza) there are about 5m Jews and 4.5m Muslims with the latter number increasing faster and more solidly religious than the former.

Clearly the strategies of war, riots, terrorism and demanding a separate state pursued for approximately three generations by politicians of surrounding Arab jurisdictions and Palestinians are incredibly stupid.

All Arabs need to do to end their hated “Jewish state” in relatively short order is to renounce violence and a separate state and demand full citizenship and voting rights in Israel. The best or worst outcomes of such a strategy (which may be flipped if one is crazy) within a generation would be a secular jurisdiction (not Jewish nor Muslim) or civil war, like Lebanon at its best or worst.

Someone who follows the politics of the Insane Land (Christianity and Islam consider it holy, which marks a strong correlation with insanity in my book) could doubtless name many reasons Palestinians and their putative friends do not pursue this strategy. Surely some do. It seems just too obious a winner (but then I have another draft post entitled something like “why is nationalist policy always stupid?”)

Those who wish to maintain a separate Jewish jurisdiction and preempt this strategy would be advised to support the creation of a “legitimate” Palestinian jurisdiction immediately, preferably one that offers citizenship and residence to Muslim citizens of Israel.

If I were a resident of the Insane Land, regardless of religion, I would do no such thing as advocate any of the above. I would concentrate on getting the hell out of the Insane Land. The West offers prosperity and safety, and parts of it offer desert and religious fanaticism, if I really wanted to be reminded of home.

If Intelligent Design is pseudoscience what does that make Christianity and other faith-based religions? Just pseudo.

I’ve been wanting to use that throwaway comment for awhile, but not having any desire to discuss ID (I’m glad there are people out there dedicated to debunking obvious crackpot pseudoscientific claims, though for some reason the targets don’t particularly provoke in me amusement, interest, or outrage, unlike purveyors of economic-political-religious-social crackpot ideas — odd peronality quirk I suppose), I haven’t until now, occasioned by the Technology Liberation Front group blog’s (I’ve cited several times) incredibly stupid decision to add a Discovery Institute employee to their roster.

My ignorant comment on ID: Overall, a positive development. Theists feel compelled to justify their faith on scientific-sounding grounds and are eager to debate real scientists. Even if the theists’ reasons for wanting to debate are completely disingenuous clearly they are on a slippery slope away from faith, which requires no evidence.

I’ve at least visited the exhibition space of almost every LWCE SF (the first one, actually in San Jose, was the most fun — Linus was a rock star and revolution was in the air) seemed bigger and more diverse, with most vendors pushing business “solutions” as opposed to hardware.

By far the most interesting exhibition booth to me was Cleversafe, an open source dispersed storage project that announced a Linux filesystem interface at the conference and was written up in today’s New York Times and Slashdot. I’ve been waiting for something like this for a long time, particularly since Allmydata is not open source and does not support Linux.

Tim Lee responds to my AOLternative history. I agree with the gist of almost everything he says with a few quibbles, for example:

Likely, something akin to a robots.txt file would have been invented that would provide electronic evidence of permission to link, and it would have been bundled by default into Apache. Sure, some commercial web sites would have refused to allow linking, but that would have simply lowered their profile within the web community, the same way the NYT’s columnists have become less prominent post-paywall.

In a fairly bad scenario it doesn’t matter what Apache does, as the web is a backwater, or Apache never happens. And in a fairly bad scenario lower profile in the web community hardly matters — all the exciting stuff would be behind AOL and similar subscription network walls. But I agree that workarounds and an eventually thriving web would probably have occurred. Perhaps lawyers did not really notice search engines and linking until after the web had already reached critical mass. Clearly they’re trying to avoid making that mistake again.

So I stand by the words “relentless” and “inevitable” to describe the triumph of open over closed systems. I’ll add the concession that the process sometimes takes a while (and obviously, this makes my claim non-falsifiable, since I can always say it hasn’t happened yet), but I think legal restrictions just slow down the growth of open platforms, they don’t change the ultimate outcome.

Slowing down progress is pretty important, in a bad way. Furthermore, I’d make a wild guess that the future is highly dependent on initial conditions, no outcomes are inevitable by a long shot, and there is no such thing as an ultimate outcome, only a new set of initial conditions.

That’s my peeve for the day.

Grandiose example: did Communism just delay the relentless march of Russian society toward freedom and wealth?

The relentless march of open standards online continues, as AOL effectively abandons its paid, premium offerings in favor of a free, advertising-supported model.

I’m happy to see open standards win and happy to acknowledge good news — I am, for the most part, an optimist, so good news feels validating.

Fundamentally, centrally planned content and services couldn’t keep up with the dynamism of the decentralized Internet, where anyone could publish new content or launch a new service for very low cost.

But just how hard is it to imagine a world in which closed services like AOL remain competitive, or even dominant, leaving the open web to hobbyists and researchers?

One or two copyright-related alternative outcomes could have put open networks at a serious disadvantage.

First, it could have been decided that indexing the web (which requires making and storing copies of content) requires explicit permission. This may have stunted web search, which is critical for using the open web. Many sites would not have granted permission to index if explicit permission were required. Their lawyers would have advised them to not give away valuable intellectual property. A search engine may have had to negotiate deals with hundreds, then thousands (I doubt in this scenario there would ever be millions) of websites, constituting a huge barrier to entry. Google? Never happened. You’re stuck with Lycos.

In the case of either or both of these alternative outcomes the advantage tilts toward closed systems that offer large collections “exclusive” content and services, which was exactly the strategy pursued by AOL and similar for years. Finding stuff amongst AOL’s exclusive library of millions of items may have been considered the best search experience available (in this reality Google and near peers index billions of web pages).

Some of the phenomena we observe on the web would have occurred anyway in stunted form, e.g., blogging and social networking — even now services like LiveJournal and MySpace feel like worlds unto themselves although they are not technically closed and services like FaceBook are closed. Journaling and networking on AOL would have been hot (but pale in comparison to the real blogosphere or even real closed systems, which face serious competition). It is hard to see how something like Wikipedia could have developed in AOLternative reality.

Fortunately aggressive copyright was not allowed to kill the web.2 As a result the march of open standards appears relentless. I’d prefer an even more relentless march, even if it means diminishing copyright (and patents).

1. I’m just using Tim Lee’s post as a jumping off point for an editorial I’ve been meaning to write, no criticism intended.

2. What is aggressive intellectual protectionism being allowed to kill or stunt? Online music is obvious.

In lieu of attending maybe the hottest conference ever I did a bit of wiki twiddling this weekend. I submitted a tiny patch (well that was almost two weeks ago — time flies), upgraded a private MediaWiki installation from 1.2.4 to 1.6.8 and a public installation from 1.5.6 to 1.6.8 and worked on a small private extension, adding to some documentation before running into a problem.

1.2.4->1.6.8 was tedious (basically four successive major version upgrades) but trouble-free, as that installation has almost no customization. The 1.5.6->1.6.8 upgrade, although only a single upgrade, took a little fiddling make a custom skin and permissions account for small changes in MediaWiki code (example). I’m not complaining — clean upgrades are hard and the MediaWiki developers have done a great job of making them relatively painless.

Saturday I attended part of WordCamp, a one day unconference for WordPress users. Up until the day before the tentative schedule looked pretty interesting but it seems lots of lusers signed up so the final schedule didn’t have much meat for developers. Matt Mullenweg’s “State of the Word” and Q&A hit on clean upgrade of highly customized sites from several angles. Some ideas include better and better documented plugin and skin APIs with more metadata and less coupling (e.g., widgets should help many common cases that previously required throwing junk in templates).

Beyond the purely practical, ease of customization and upgrade is important for openness.

Now listening to the Wikimania Wikipedia and the Semantic Web panel…