Innovation Fellows come from a variety of backgrounds but share several common characteristics:

Too bad this is probably not a parody of critiques of strawmen who supposedly have total faith in technology to make the world an excellent place in the next ten minutes. More likely, they are in true objective Public Relations positions, or perhaps Internal Relations.

I wonder if “Give me three examples demonstrating your unshakable belief in the power of technology” will be asked during interviews? I suppose the joke answers write themselves, e.g., “I took MUNI to this interview”, “I bought a computer with Windows pre-installed”; you can do much better.

Posted in Peeves | No Comments »

Developer Freedom At Stake As Oracle Clings To Java API Copyrights In Google Fight (dated 2013-03-30; I failed to complete this post in one sitting and let it sit…):

Oracle lost in their attempt to protect their position using patents. They lost in their attempt to claim Google copied anything but a few lines of code. If they succeed in claiming you need their permission to use the Java APIs that they pushed as a community standard, software developers and innovation will be the losers. Learning the Java language is relatively simple, but mastering its APIs is a major investment you make as a Java developer. What Android did for Java developers is to allow them to make use of their individual career and professional investment to engage in a mobile marketplace that Sun failed to properly engage in.

Johan Söderberg, Hackers GNUnited! (2008; appeared as chapter in book I also contributed to; Söderberg’s text stuck with me, as I’ve quoted an extended bit of it before):

Intellectual property rights prevent mobility of employees in so forth that their knowledge are locked in in a proprietary standard that is owned by the employer. This factor is all the more important since most of the tools that programmers are working with are available as cheap consumer goods (computers, etc.). The company holds no advantage over the worker in providing these facilities (in comparison to the blue-collar operator referred to above whose knowledge is bound to the Fordist machine park). When the source code is closed behind copyrights and patents, however, large sums of money is required to access the software tools. In this way, the owner/firm gains the edge back over the labourer/programmer.

These kinds of critiques of intellectual protectionism from the perspective of developer freedom to do their trade, in addition to developer freedom to modify and control their computing environment, to tinker, are too rare. I’m also reminded of the fun title Noncompete Agreements Are The DRM Of Human Capital. So are copyright and patent.

Back to Developer Freedom At Stake…:

Will our economy thrive and be more competitive because companies can easily switch from one service provider to the other by leveraging identical APIs? Or will our economy be throttled by allowing vendors to inhibit competition through API lock-in? And should this happen only because a handful of legacy software vendors wanted to protect their franchises for a few more years?

Clearly this isn’t just about developer freedom. Nor is it just about user freedom — non-users are affected by anti-competitive practices — and the freedom of all is put at risk.

Bonus: What do APIs have in common with advertising?

Opposing “illegal” immigration is xenophobic, or more bluntly, advocating for apartheid “because it’s the law”

Matteo Salvini, secretary of the League in Lombardy, called the 48-year-old Kyenge “the symbol of a hypocritical, do-gooding left that would like to abolish the crime of illegal immigration and only thinks about immigrants’ rights and not their duties”.

Sadly I doubt much of the left would really like to abolish the “crime of illegal immigration”, but it should, indeed all should be totally opposed to apartheid, which is precisely what restrictions on movement, working, and residence are.

Immigrants’ rights and duties should be no different than non-immigrants. Putting people in different moral categories due to their birth is an outrage.

The AC Milan and Italy striker, Mario Balotelli, called her appointment “a further, big step towards a more civilised and responsible Italian society”. Kyenge said her top priorities included changing Italy’s citizenship laws, which are based on descent rather than place of birth.

An indictment of Italy and the world that this is correctly characterized as a big step, but it is a positive step in any case.

The Northern League denies it is xenophobic, insisting it is only opposed to illegal immigration. Kyenge came to Italy to study at university and married an Italian.

No, laws making immigration illegal are xenophobic as is supporting such laws and using such laws to persecute some people. More bluntly, opposing “illegal immigration” is advocating for apartheid “because it’s the law.”

Shame on all who oppose the immediate destruction of the international apartheid regime, keeping billions in poverty and oppression (or put another way, massively squandering human capital) out of fear and racism.

I offer you amnesty.

Why DRM in HTML5 and what to do about it

Kẏra writes Don’t let the myths fool you: the W3C’s plan for DRM in HTML5 is a betrayal to all Web users.

Agreed, but what to do about it?

In the short term, the solution is to convince W3C that moving forward will be an embarrassing disaster, nevermind what some of its for-profit members want. This has been accomplished before, in particular 2001 when many wanted W3C to have a RAND (allowing so-called Reasonable And Non-Discriminatory fees to be required for implementing a standard) patent policy, but they were embarrassed into finally doing the right thing, mandating RF (Royalty Free) patent licensing by participants in W3C standards.

One small way to help convince the W3C is to follow Kẏra’s recommendation to sign the Free Software Foundation’s No DRM in HTML5 petition.

Long term, the only way the DRM threat is going to be put to rest is for free cultural works to become culturally relevant, if not dominant (the only unambiguous example of such as yet is Wikipedia exploding the category known as “encyclopedia”). One of Kẏra’s points is “The Web doesn’t need big media; big media needs the Web.” True, but individual web companies do fear big media and hope for an advantage over competitors by doing deals with big media, including deals selling out The Web writ large (that’s the “Why” in this post’s title).

To put it another way, agitation for “Hollyweb” will continue until Hollywood is no longer viewed as the peak of culture. I don’t mean just, and perhaps not even, “Hollywood movies”, but also the economic, ethical, social and other assumptions that lead us to demand delivery of more pyramids over protecting and promoting freedom and equality.

I don’t have a petition to recommend signing in order to help increase the relevance and dominance and hence unleash the liberation potential of knowledge commons. Every bit of using, recommending, building, advocating for as policy, and shifting the conversation toward intellectual freedom helps.

Waiting out DRM (and intellectual protectionism in general) is not a winning strategy. There is no deterministic path for other media to follow music away from DRM, and indeed there is a threat that a faux-standard as proposed will mean that DRM becomes the expectation and demand of/by record companies, again. In general bad policy abets bad policy and monopoly abets monopoly. The reverse of each is also true. If you aren’t helping make freedom real and real popular, you hate freedom!☻

By Falkvinge on Infopolicy columnist Zacqary Adam Green (also creator of the excellent Your Face Is A Saxophone cartoon).

From at least the mid-1980s through the mid-1990s Pat Choate seemed to me to be the go-to pundit for anti-foreign (where “foreign” means “not USian”) punditry. His basic view seemed to be that foreign businesses, governments, and people were bad and sought to undermine everything USian. Hence he was opposed to trade and immigration, and sought a variety of nationalist and nativist policies to fight this conspiracy. I hated everything he wrote. “Protectionist” was a charitable description of him.

He ran for VP with Ross Perot in 1996. I ceased to notice him from about that time, probably largely because I started to cut back on following the spectacle of current events around then.

Today I learned via two posts at Techdirt that Choate had by 2005 (date of a book he wrote titled Hot Property, with hilarious burning compact disc book cover art) added intellectual protectionism to his repertoire:

We recently posted about an absolutely ridiculous NY Times op-ed piece in which Pat Choate argued both that patent laws have been getting weaker, and that if we had today’s patent laws in the 1970s that Apple and Microsoft wouldn’t have survived since bigger companies would just copy what they were doing and put them out of business. We noted that this was completely laughable to anyone who knew the actual history. A day or so ago, someone (and forgive me, because I can no longer find the tweet) pointed me on Twitter to a 45 minute excerpt from a documentary about the early days of Microsoft and Apple and it’s worth watching just to show how laughably wrong Choate obviously is.

I’m sorry to report that I get some dim satisfaction from learning that Choate’s trajectory led him to intellectual protectionism and feel some additional validation for using that term to describe copyright, patent, trademark, and nearby.

This is a winner-take-all economy where a small knowledge elite captures most of the economic value. The economic structure rewards a few and leaves the great majority behind. The resulting social friction of a two-tier society consisting of “knows” and “know-nots” consumes much of the economy’s potential in a vicious cycle.

The fruits of innovation drive economic growth in some parts of the world, creating local islands of prosperity. Highly educated knowledge workers do very well, but a modest education produces little economic benefit. Low wages characterise most service and manufacturing work. Overall, organisations evolve very slowly and remain mainly traditional in form. The “fast” gradually pull away from the “slow”. Highly divergent outcomes result as a few countries do well behind high-security shields and others fall behind. Intellectual protectionism is rife and the free flow of ideas is highly constrained by those who want to protect the value of their intellectual property and those who want to prevent the informational “pollution” of their populations. 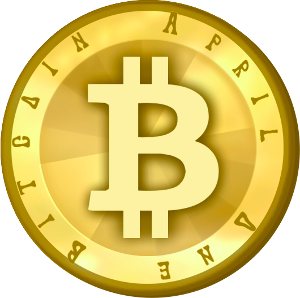 At the FSF’s annual conference last year I pledged to donate 100BTC to the FSF, and did so on April 6. I bought about 121.95 bitcoins, for a price of about US$4.92/BTC (made easier thanks to Greg Maxwell’s vouching for me on #bitcoin-otc; thanks!) and haven’t given any thought to the remainder till today. As I write this the USD/BTC price is approximately US$105.40/BTC.

You too can invest! How to buy bitcoins. Donate to the FSF and other “notable” bitcoin-accepting organizations, many of which I endorse. Results not typical.

For the long term, I’m sticking with my prediction of almost two years ago that “governments and any other entity with a large measure of control over how it can demand payment will launch their own cryptocurrencies, seeking endowments for themselves much as Bitcoin’s inventor and early adopters may have gained.”

I have a similar long-term prediction for seasteading: “if seasteads did meet engineering and economic challenges, they would merely be used by states to stake exclusive claims to all of the planet’s surface.”

Wish me “happy birthday” on Facebook, “endorse” me for “scalability” on LinkedIn.

More seriously, why not give a gift to all? Extrapolate a bit from notices found on individual works (examples abound, often stipulating a public license, but a see classic one, stipulating public domain):

Unless stated otherwise, everything by me, Mike Linksvayer, published anywhere, is hereby placed in the public domain.