On the Creative Commons blog I highlight the connection between 2009 Nobel Prize in Economics winner Elinor Ostrom‘s work on the governance of common-pool resources and relatively recent work on knowledge commons, including a 2003 paper she co-authored addressing the connection.

Great choice. There are countless posts in the econoblogosphere about the prize — I’ll mention two. Paul Romer (a favorite to win the Nobel himself) praises her practice of economics, essentially as being based on an investigation of reality rather than wishful thinking (what Romer calls a “skyhook”):

They, more than anyone else in the profession, spelled out the program that economists should follow. To make the rules that people follow emerge as an equilibrium outcome instead of a skyhook, economists must extend our models of preferences and gather field and experimental evidence on the nature of these preferences.

Economists who have become addicted to skyhooks, who think that they are doing deep theory but are really just assuming their conclusions, find it hard to even understand what it would mean to make the rules that humans follow the object of scientific inquiry. If we fail to explore rules in greater depth, economists will have little to say about the most pressing issues facing humans today – how to improve the quality of bad rules that cause needless waste, harm, and suffering.

Cheers to the Nobel committee for recognizing work on one of the deepest issues in economics. Bravo to the political scientist who showed that she was a better economist than the economic imperialists who can’t tell the difference between assuming and understanding.

Alex Tabarok (who I’ve mentioned before on the related problem of private provision of public goods provides a summary of Ostrom’s work on the well-governed commons. Here’s Tabarrok’s excellent closing paragraph:

For Ostrom it’s not the tragedy of the commons but the opportunity of the commons. Not only can a commons be well-governed but the rules which help to provide efficiency in resource use are also those that foster community and engagement. A formally government protected forest, for example, will fail to protect if the local users do not regard the rules as legitimate. In Hayekian terms legislation is not the same as law. Ostrom’s work is about understanding how the laws of common resource governance evolve and how we may better conserve resources by making legislation that does not conflict with law.

For the past few years the State Journal-Register, the only daily newspaper in Springfield, Illinois, where I grew up, has published under a Creative Commons Attribution-NonCommercial-NoDerivatives license as part of GateHouse Media.

Furthermore, at least relative to the newspaper industry’s low standards, the SJ-R site is excellent. (Latest indication I’ve noticed of how low newspaper site standards are — visit the Oakland Tribune‘s site, click on “home delivery”, and you’ll get the home page content again — actually you get “page not found” but the site returns the home page content for any page it doesn’t know about — see the archived home page and /services.)

Today’s paper has a curious feature that I’ll take advantage of the limited rights granted by GateHouse’s use of the most restrictive CC license to republish, as I did previously with the Google Chrome Comic. 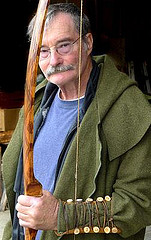 Bow builder Bob Linksvayer has been constructing his own bows, arrows and other hunting equipment since he was a teen-ager. Chris Young/The State Journal-Register / CC BY-NC-ND 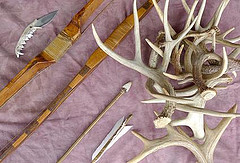 Bob Linksvayer makes all types of traditional hunting equipment including bows, arrows, knives and other gear. What he can’t make, he trades with other craftspeople. Chris Young/The State Journal-Register / CC BY-NC-ND

For Bob Linksvayer, building his own bows and arrows is about more than living history and keeping a lost art alive.

Linksvayer, who has made his own archery equipment since he was 13 years old, marvels at those early hunters who calculated the trajectory of arrow flight without math and crafted their bows to compensate.

He shows how the art of making arrows requires patience — it takes up to one year for the wooden shafts to dry.

Ancient hunters needed knowledge. They were masters of the natural history of their area, choosing only the best wood (hickory) for bows and the straightest shoots (arrowwood viburnum) for arrows. They made stain from walnut husks and bowstrings from woven flax. A coyote’s jawbone makes the perfect knife handle — with options for both righties and southpaws.

“For every coyote walking around, there is a right- and left-handed knife handle in the lower jaw,” he says.

And he shows how it all works perfectly when everything is done right.

“These arrows have been through a lot of deer,” he says with a smile.

Linksvayer, who lives east of Springfield between Dawson and Mechanicsburg, has taught the art of building a bow for 20 years. He also participates in historical re-enactments.

He will be demonstrating the art of woodworking today and Sunday during Lincoln Memorial Garden & Nature Center’s Indian Summer Festival.

He’s a hunter who proves the worth of his wares. A pile of antlers testifies to his success rate. His arrows are fletched with the feathers of a turkey he shot.

“I’ve never had a deer mounted,” he says. “Instead, I use the antlers for tools.”

“When I see a buck walk up under my stand, I look at the antlers and wonder how many knife handles I can make.”

The big sporting-goods retailers probably are glad Linksvayer doesn’t have a lot of peers. He says he tries to make or trade for everything he uses.

It’s all in the details

Squinting at the trunk of a hickory tree, imagine the curve of the back of the bow just below the surface of the bark.

“A bow is nothing more than a handle with two springs on it,” he says. “In the process of building a bow, they have to be exactly the same. You can’t deviate from that.”

A bow on full draw has a lot of potential energy ready to be unleashed.

“You never draw back a bow and release it without an arrow,” Linksvayer says. “There has to be a load.”

When the string stops, shock waves of the release of the arrow surge back and forth through the bow. If it’s not constructed properly, it could fail.

Bows have to be carved in one piece, he says. Adding a handle later is no good, as the whole thing will be too weak.

The process of removing wood from the inside of the bow is called tillering.

“Wood is removed from the belly of the bow so you can bend it,” he says.

Ideally, enough wood is removed so both limbs will bend the same.

However, a bit of additional wood is removed from the upper limb to give the arrow a bit of higher trajectory, so as gravity pulls it towards the ground, it can strike its target at 20 yards right where it is intended.

“The falling arrow will cross the line of sight about 20 yards out,” Linksvayer says. “I try to keep my shots within 20 yards or less.”

Linksvayer became interested in bows as a boy of 13. His father wouldn’t turn him loose with a gun to hunt rabbits, but relented when he offered to use a bow.

“I read as many books as I could,” he said. One book was shipped in for him to read, but couldn’t be checked out. He went to the library every day to read, draw pictures and take notes.

“I came to the conclusion that the Indians and our ancestors did not have a written language when they developed bows,” he says — a bit of insight that makes the feat of engineering all the more amazing.

But while Linksvayer has accumulated years of experience building bows, he still can’t speed up the process.

“Nothing is fast by today’s standards.”

Sad news from Hal Finney, diagnosed with ALS. I’ve only met him briefly, but have been following his writing, mostly on mailing lists, for nearly two decades. Very few if any people exist whose thoughts I trust and respect as much as his.

Titled Dying Outside, Finney’s post about his diagnosis, is a fine example of his writing, for the future.

AcaWiki† officiously launches tomorrow. The goal is to make academic knowledge more accessible through wiki community curated article “summaries” — something like long abstracts aimed at a general audience rather than specialists.

This could be seen as an end-run around access and copyright restrictions (the Open Access movement has made tremendous progress though there is still much to be done), but AcaWiki is a very partial solution to that problem — sometimes an article summary (assuming AcaWiki has one) would be enough, though often a researcher would still need access to the full paper (and the full dataset, but that’s another battle).

More interesting to me is the potential for AcaWiki summaries to increase the impact of research by making it more accessible in another way — comprehensible to non-specialists and approachable by non-speedreaders. I read a fair number of academic papers and many more get left on my reading queue unread. A “human readable” distillation of the key points of articles (abstracts typically convey next to nothing or are filled with jargon) would really let me ingest more.

Probably the closest things to AcaWiki summaries are Research Blogging and the idea that journal authors should contribute to Wikipedia. While both of these are great, blog posts don’t obtain the benefits (and costs) of distributed authoring and maintenance and direct contribution of research to Wikipedia has very limited applicability. So I think AcaWiki can make a big contribution. It could turn out that some granularity other than individual article summary is the sweet spot for community curation of academic knowledge — one could imagine field and sub-field and sub-sub-field surveys organized in WikiProject†† fashion as that — but article summaries are a very concrete place to begin, and more should naturally grow out of the AcaWiki community’s efforts to figure out the best ways to create and organize article summaries.

I’ve written a summary of Steven Levitt’s Why are Gambling Markets Organised So Differently from Financial Markets? I’d be really appreciative of article summaries in the following categories:

†I’ve been somewhat involved in AcaWiki over the past year — I’m on its board and Creative Commons has done some technology consulting on the project, credit to Nathan and bits from Steren, Nathan K, Alex and Parker — and note that Neeru Paharia, AcaWiki’s founder, was one of CC’s earliest employees. AcaWiki summaries are of course contributed under a CC Attribution license, so you can do anything you want with them so long as you link back to the summary.

††I urge anyone not already impressed by the contribution of WikiProjects on Wikipedia or generally interested in community curation and quality to check out Martin Walker’s WikiProjects: Improving Wikipedia by organising and assessing articles presented at Wikimania 2009.