One can debate what counts as an “open source company” (presumably something like “[almost] all software developed and distributed is open source”), but Red Hat is relatively uncontroversial; less so than the companies Proffitt lists as possibly next: EnterpriseDB, , and Eucalyptus. I might have included Canonical Ltd among those, but I didn’t look closely for indicators of whether any could reasonably become $1 billion annual revenue companies, or reach an easier $billion milestone, valuation — Proffitt notes that MySQL AB was acquired for approximately $1 billion in 2008.

An even more obvious addition to the watchlist ought be Mozilla, which should have annual revenues exceeding $300 million. Mozilla is least problematic on the “open source” front, though the for-profit corporation is wholly owned by the non-profit Mozilla Foundation, which could lead one to overlook it as a “company”. This also means it won’t have a traditional company valuation (acquisition price or market capitalization), but it’d be clearly over $1 billion.

There’s one other open source organization that, if it pursued huge revenues and were for-profit (both requiring many counterfactuals that may well have destroyed the project; I advocate neither, though I have advocated huge revenues in the past) would be a billion dollar company by valuation and perhaps revenue as well — Wikimedia. I wonder, given that it forgoes huge revenue from advertising, and most people claim to dislike and find little or no utility in online advertising, what we can conclude about the consumer surplus generated by Wikimedia?

As hugely problematic as they are, huge organizations (most obviously governments and corporations) outcompete smaller arrangements in many aspects of human society. If software freedom and the like is important, advocates ought to be rooting for (and criticizing) huge “open source” institutions. And should also be looking for (admittedly difficult) characterizations of consumer surplus and other “billion dollar” metrics in addition to firm revenue and valuation of future profits.

Some friends have been working on a to-be-federated media hosting web application called MediaGoblin. They’re running a crowdfunding campaign to pay for more developer time. Please join me in feeding the developers.

For irony and goading (noted and fixed before I could get this post up), an appreciation (but not implementation) of POSSE (probably complementary to federation, but a different take on not entirely the same problem), and a test of hosting (which includes identifiers) permanence, I uploaded their campaign video various places. I’ve ordered below by my guess at longevity, from high to low (* next to those I did not upload).

Commented out FSF static hosting found in source of the campaign page.*

CDN hosted files found in source of the campaign page.*

I’m very mildly annoyed with some discussion of “open data”, in part where it is an amorphous thing for which expectations must be managed, value found and sustainable business models, perhaps marketplaces, invented, all with an abstract and tangential relationship to software, or “IT”.

All of this was evident at a recent Open Knowledge Foundation meetup at the Wikimedia Foundation offices — but perhaps only evident to me, and I do not really intend to criticize anyone there. Their projects are all great. Nonetheless, I think very general discussion about open data tends to be very suboptimal, even among experts. Perhaps this just means general discussion is suboptimal, except as an excuse for socializing. But I am more comfortable enumerating peeves than I am socializing:

“Nuance” is a vague joke in lieu of a useful title.

Diocese of Springfield, Illinois ©ensors criticism of its Bishop Paprocki

I recognize the rhetorical value of pointing out that copyright can be used for unambiguous censorship but I try to avoid doing so myself: “can be used for” downplays “is”. But the following is too good to let pass. 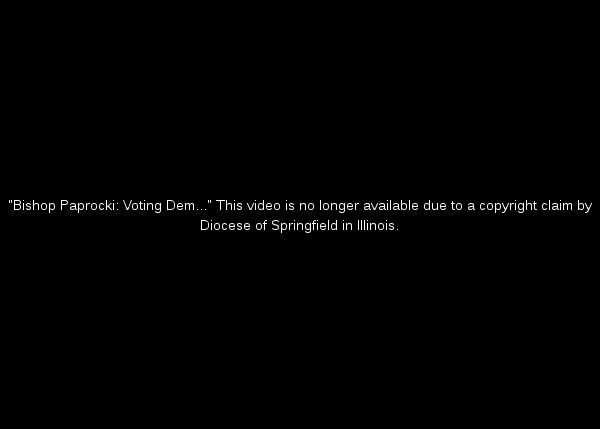 Paprocki made a video sermon in which he says that voting Democrat puts one’s soul at risk, while disclaiming telling anyone how to vote.

Brian Tashman posted a criticism of Paprocki’s video, including (I surmise [Update: I was probably wrong; looking at the post again, I’m changing my guess to verbatim excerpt]) a video of himself on video criticizing Paprocki’s statements, including relevant excerpts of Paprocki’s video. I found Tashman’s post and video via a post titled This Week in God, where I noticed the embedded YouTube video frame said:

Bishop Paprocki: Voting Dem…This video is no longer available due to a copyright claim by Diocese of Springfield in Illinois.

I’m going to guess that Tashman’s use of the Paprocki video sermon was very clearly fair use. But even if the entire video was included verbatim, it’d be a zero diff parody. If you want to watch that, the original is linked above, and excerpted and uncut-with-but-grainy-with-additional-watermark versions posted by Paprocki fans remain on YouTube.

I don’t see how Paprocki’s statements could be electioneering, as nobody believes in eternal salvation or damnation, right? In case I’m wrong, some are using the opportunity to call for revoking the Diocese of Springfield’s tax extempt status.

(I grew up in Springfield, Illinois and heard they were getting a curious Catholic bishop last year, one who promotes exorcisms and says that sex abuse lawsuits are the work of the devil — not sex abuse, but lawsuits intended to redress the abuse. That’s Paprocki. But I’m not poking fun of Springfield. Salvatore Cordileone was recently promoted from Oakland bishop to San Francisco archbishop, shortly after demonstrating that the blood of Christ does intoxicate and can result in a DUI. Furthermore, I empathize with Paprocki. If I believed abortion were mass murder and homosexuality an abomination, I would feel compelled to risk mere tax benefits in order to tell people to vote against candidates who I perceived as being for murder and abomination. Indeed, I must tell you to not vote for Romney or Obama, as they both favor mass murder and abomination performed by the U.S. security state: murder, murder, murder, torture, and mass incarceration. But I’m rooting for Obama, as I suspect he favors a little less torture.)