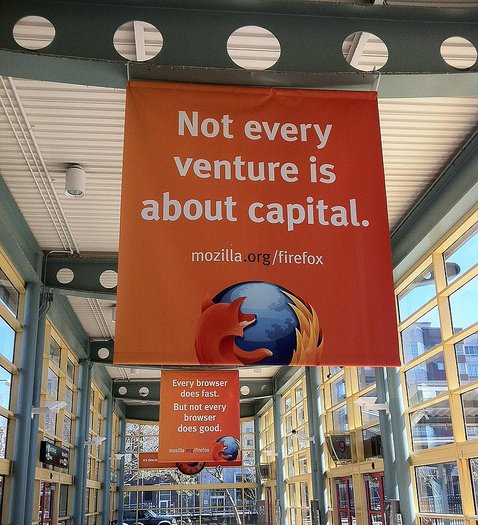 Congratulations to Mozilla on their $300m/year deal with Google, which will more than double current annual revenue. I’ve always thought people predicting doom for Mozilla if Google failed to renew were all wrong — others would be happy to pay for the default search position; probably less since Microsoft, Yahoo, and others make less than Google per ad view, but it’d still be a very substantial amount — and the link article hints that a Microsoft bid drove the price up.

There’s always a risk that Mozilla won’t spend the money well, but I’m pretty confident that they will. Firefox is excellent, and in 2011 has gotten more excellent, faster, and I think many of the other projects they’re doing are really important, and on the right track (insofar as I’m qualified to discern, which is not much), for example BrowserID. Even in small and hopelessly annoying things, like licensing, I think Mozilla is doing good. (Bias: Mozilla has donated to my employer.)

I’m no longer enthused about the possibility of huge resources for progress toward Wikimedia’s vision from advertising on Wikipedia. Since I was last on that bandwagon, it has become even less of a possibility in anything but the distant future: Wikimedia’s donation campaigns have gone very well, adequately funding its operating mission, and lack of advertising has become even more part of Wikimedia’s messaging; I’ve also become more concerned (not in particular to Wikimedia) about the institutional corruption risks previously blogged by Peter McCluskey and Timothy B. Lee. (Note these objections don’t apply to Mozilla: its significant revenue has always been advertising-based; very roughly its revenues are already 10x those of Wikimedia’s; and it is also building up an individual donor program, which I agree is often the healthiest revenue for a nonprofit.)

But I still very much think freedom needs massive, ongoing resource infusions, in the right institutional framework. I celebrate the tremendous benefits of the FLOSS community achieves without massive, concentrated, ongoing resource infusions, but I also admit that the web likely would be much worse, much less webby, and much less free without concentrated resources at Mozilla over the last several years.

Thank you Mozillians, and congratulations. I have very high expectations for your contributions over the next years to the web and society, in particular where more freedom and security are obviously needed such as mobile and software services. Such would be just a start. As computation permeates everything, and digital freedom becomes the most important political issue, the resources of many Mozillas are needed. More on that, soon.