I recently watched a presentation by Benjamin Mako Hill on Almost Wikipedia: What Eight Collaborative Encyclopedia Projects Reveal About Mechanisms of Collective Action (audio and video at the link) — or some conjectures about why Wikipedia took off, while 7 older English language internet encyclopedia projects did not.

The presentation had some interesting bits of net history, at least to someone as poorly read as myself — I had only heard about Interpedia (1993) and The Distributed Encyclopedia Project (1997) recently via a timeline of distributed Wikipedia proposals.

Through study of materials concerning the older projects and interviews with project founders, Hill arrived at 4 propositions…

…mapped on a grid reminiscent of many diagrams of “innovation quadrants” (example): 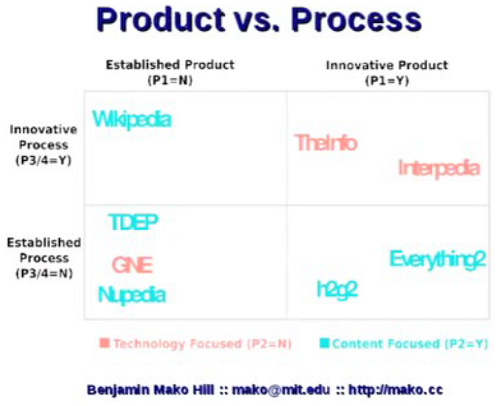 Or, as Dan O’Sullivan said with a broader stroke, ‘Everything is radical about Wikipedia except for the actual articles’.

At first blush this indicates that I should temper my enthusiasm for claiming that Wikipedia exploded the category of encyclopedias and that more free collaboration projects should aim to explode additional product categories.

Though early Wikipedians set out to create an encyclopedia, and I’m persuaded that presenting contributors with a familiar product to build helped it succeed, I think it is clear that Wikipedia, or more properly 845 language Wikipedias and other Wikimedia projects, have created a “product” that is much more useful and different from previous encyclopedias in ways that justify saying it has “exploded” the category. Yes, individual articles read more or less like previous encyclopedia articles, but then emails read more or less like letters. One approach to thinking about how big of an impact Wikipedia may have made so far would be to compare Wikipedia to surviving proprietary online encyclopedias (or perhaps hypothetical ones, had Wikipedia or similar never happened). I suspect the comparison would be akin to AOL and near peers vs. the internet.

One small thing that we’ve mostly figured out that we mostly hadn’t figured out 10+ years ago (or 20+ years ago for software) is appropriate copyright licensing. I dimly recall from the past reading about copyright issues with keeping h2g2 going, and limitations for everything2 (no license is required, so entries are mostly solo-contributor), but I quickly looked at a few of the other projects Hill mentioned and found some curiosities. Interpedia’s FAQ on copyright doesn’t say what the project’s copyright policy is, but does express fear of an infamous patent. The Distributed Encyclopedia Project used what would now be recognized as an onerous and impractical license that at a glance I’m not sure agrees with the brief statement found at the bottom of an example article. The very first archive.org capture of theinfo.org states “All of the content is released under the Anti-Copyright License”, which sounds hopeful, though subsequent captures don’t have that statement, and the text of said license is not captured.

I’m really looking forward to Hill’s publication, as well as the further development of his research program concerning mass collaboration and social movements. Also, check out his reading list on AcaWiki.

I rushed through my final slides and promised to expand on them virtually, which I’ve done here with more slides (odp, pdf, slideshare), or watch a video narration of same (archive.org, YouTube):

Thanks to Open World Forum co-president Louis Montagne and Knowledge Commons track leader Florence Devouard for inviting me to participate!