After over three and a half years I am finally the best bitizen, as defined by a formula that takes into account the amount of file metadata contributed to Bitzi and the quality of that metadata, as rated by other “bitizens” (Bitzi users): 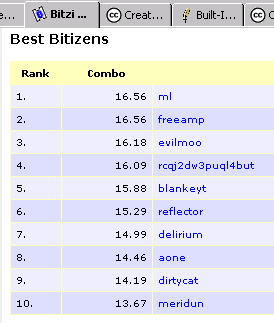 How did I obtain this dubious (as a Bitzi cofounder) honor?

I’ve more or less consistently reported some of the random junk I may have encountered (though around 30 Bitzi users have reported more, all over a shorter active period) and more importantly, have occasionally taken care to add accurate metadata to reports.

On the negative side, I’ve more or less consistently failed to put much effort into adding new features since Bitzi went into hibernation. If I had, doubtless many more prolific than I (nearly everything I download is from the web — file sharing networks, especially post-Napster (really post-AudioGalaxy), are still practically useless in my estimation, unless you have lots of time to kill, i.e., you’re a bored teenager) would’ve stuck around and I’d be nowhere near numero uno.

Download the bitcollider (file metadata reporting tool) and knock me off my throne!