Sun announced today that it is releasing all of the critical pieces of the Java platform under the GPL. This is fantastic news, as a huge number of important and exciting projects are built on the Java platform and now they can be completely free as in free software. Read Tim Bray on the announcement and lots more blog commentary via Tailrank.

This should have happened years ago but as of yesterday it happened sooner than I expected. I set up a play money prediction market on Inkling (the first of two) asking whether Java would be open sourced by the end of this year. The price slowly declined from 60 in May to 20 in late October, then spiked to 70, with a last trade at 81.76 this morning. 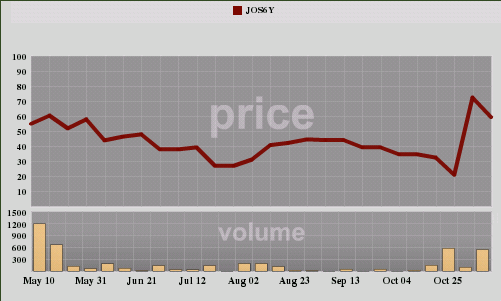 I judged the contract at 100, but probably shouldn’t have — much of the code won’t be released until early next year. Oops. Good thing Inkling markets are play money and zero oversight, or Chris F. Masse would rightly castigate me.