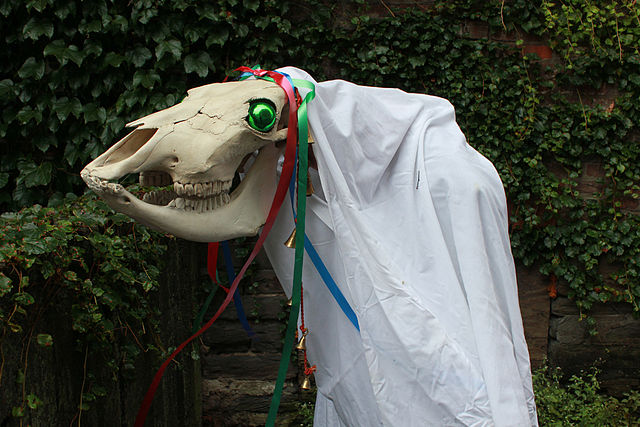 A photo of a Mari Lwyd, from the Welsh tradition CC-BY-SA by R. fiend

My post on 5 years of GPLv3 got picked up by LWN.net, see a medium-sized comment thread. There and elsewhere some people thought I was spinning or apologizing for GNU GPLv3. I can see why; I should’ve included more disclaimers. I certainly was spinning — some of my hobby horses, not for GPLv3. I shouldn’t expect anyone except maybe a few faithful readers and friends to accurately detect my hobby horses. Here are the relevant ones, sans GPLv3 anniversary dressing:

Thus (one of) my stated “metrics” for judging GPLv3, “number and preponderance of works under GPLv3-compatible terms.” I should have generalized: a marker for a license’s success is the extent to which it contributes to increasing the pool of works which may be used together without copyright as a barrier (but possibly as a pro-sharing regulatory enforcement mechanism). It makes sense to talk about this generalization specifically in terms of the pool of GPLv3-compatible works because it is the closest thing we have to a universal recipient (technically AGPLv3 is that, but it is less well known, I don’t know of any license that is AGPLv3 compatible but not GPLv3 compatible, and I’ll cover it further in a future post).

I said by this metric GPLv3 is doing pretty well. But that depends on where one wants to start from. GPLv3 allowed for the preexisting Apache2 to be compatible with it, and for MPL2 to be developed such that it could be. But maybe it was ridiculous for Apache2 to have been released without being GPLv2 compatible. And I consider GPLv2’s option for incompatibility with future versions a gross error (which GPLv3 repeated; it just isn’t felt right now as there probably will be no GPLv4 for a very long time). One could reasonably argue that the only useful development in licensing in the history of free and open source licensing is BSD3 dropping BSD4’s advertising clause (and to a lesser extent BSD2 also dropping a no endorsement clause — note that BSD# refers to the number of clauses present, not versions, and note that one could argue that people should’ve used similar licenses like MIT and ISC without the problematic clauses all along). But given that previous history could not be rewritten in 2006 and 2007, I think GPLv3 has done pretty well, and at the very least could have done a whole lot worse.

Could GPLv3 have done a whole lot better? I appreciate that some people would’ve preferred no versioning, or perhaps a conservative versioning which could have achieved Apache2 and eventually MPL2 compatibility and have been uncontroversial for all GPLv2 licensors to move to. That would have to weighed against the additional (and controversial, e.g., anti-Tivoization) measures GPLv3 actually has, and as I said in my previous post, I think it will take a long time to be able to judge how big of an instrumental effect those have toward software freedom. But again, in 2012 previous history can’t be rewritten, though consideration of such hypotheticals could possibly help us make improved choices in the future, which is being written now: version 4.0 of various Creative Commons licenses are in development (in addition to the somewhat abstract hobby horses listed above, my previous post can be read as an abstract case for specific CC BY-SA 4.0->GPLv3 compatibility) and Richard Fontana has just started drafting Copyleft.next.

In case anyone thinks I’m still spinning or apologizing for GPLv3, let me state that over the past 5 years I’ve grown increasingly skeptical about copyleft-via-copyright-licenses (but I still think it has a useful role, especially given inability to rewrite history, and cheer its enforcement; if you don’t like enforcement, use a permissive instrument). I’ll write a post about why in the fullness of time, but for now, the executive summary: institutions, obscurity, politics, stupidity.

To close on an appreciative, celebratory note: forget analysis of GPLv3’s net impact — it is a fine, elegant, and surprisingly readable document. Especially in comparison to extant Creative Commons licenses, which lack both clarity of purpose and readability (according to various readability metrics, CC 4.0 licenses will probably catch up to and maybe surpass GPLv3 on readability). Compatibility aside, one of my major tendencies in advising on CC 4.0 is to advocate for copying GPLv3 in a number of places. I probably won’t ever get to it, but I could do a post or series of posts on the sentences and strategies in GPLv3 that I think are great. Also, check out the FSF’s GPLv3 turns 5 post featuring a cake.