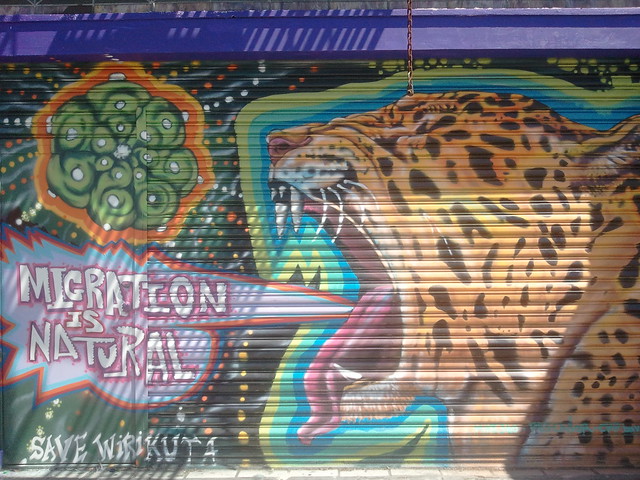 The mural pictured above is around the corner from where I live. I’m happy to find out that it means what I hoped — though I’d be surprised if the muralists didn’t arrive via some very different considerations. The Community Rejuvenation Project commissioned the mural and yesterday posted a photo of it with the following caption:

This piece on San Pablo by 60th st. is a collaboration between Pancho Pescador and Mike 360. The goal of this piece is to support natural migration and eliminate imaginary human borders.

Proud to have this in my neighborhood. Another visual advocating intellectual freedom nearby would make a tiny part of me feel complete.

I had not heard of before and have no opinion at this time concerning Wirikuta. Apparently some people view it as a holy site while others want to mine it. The atheist in me wants to disingenuously urge the full separation of the existing and non-existing universes, rendering any complaint about despoiling a holy site because it is holy as preposterous as believing in things that don’t exist. But I’m sure there are other, entirely naturalistic, concerns from both sides.