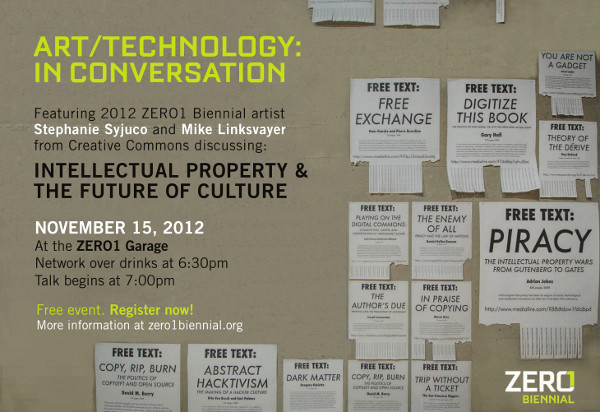 I’m looking forward to this “in conversation” event with artist Stephanie Syjuco. The ZERO1 Garage is a neat space, and Syjuco’s installation, FREE TEXTS: An Open Source Reading Room, is just right.

For background on my part of the conversation, perhaps read my bit on the future of copyright and my interview with Lewis Hyde, author of at least one of the treated FREE TEXTS (in the title of this post “beating of books” is a play on “beating of bounds”; see the interview, one of my favorite posts ever to the Creative Commons blog).

One of the things that makes FREE TEXTS just right is that “IP” makes for a cornucopia of irony (Irony Ponies for all?), and one of the specialty fruits therein is literature extolling the commons and free expression and problematizing copyright … subject to unmitigated copyright and expensive in time and/or money to access, let alone modify.

Even when a text is in-theory offered under a public license, thus mitigating copyright (but note, it is rare for any such mitigation to be offered), access to a digital copy is often frustrated, and access to a conveniently modified copy, almost unknown. The probability of these problems occurring reaches near certainty if a remotely traditional publisher is involved.

Two recent examples that I’m second-hand familiar with (I made small contributions). All chapters of Wealth of the Commons (Levellers Press, 2012) with the exception of one are released under the CC-BY-SA license. But only a paper version of the book is now available. I understand that digital copies (presumably for sale and gratis) will be available sometime next year. Some chapters are now available as HTML pages, including mine. The German version of the book (Transcript, 2012), published earlier this year with a slightly different selection of essays, is all CC-BY-SA and available in whole as a PDF, and some chapters as HTML pages, again including mine (but if one were to nitpick, the accompanying photo under CC-BY-NC-SA is incongruous).

The Social Media Reader (New York University Press, 2012) consists mostly of chapters under free licenses (CC-BY and CC-BY-SA) and a couple under CC-BY-NC-SA, with the collection under the last. Apparently it is selling well for such a book, but digital copies are only available with select university affiliation. Fortunately someone uploaded a PDF copy to the Internet Archive, as the licenses permit.

In the long run, these can be just annoyances and make-work, at least to the extent the books consist of material under free licenses. Free-as-in-freedom does not have to mean free-as-in-price. Even without any copyright mitigation, it’s common for digital books to be made available in various places, as FREE TEXTS highlights. Under free licenses, it becomes feasible for people to openly collaborate to make improved, modifiable, annotatable versions available in various formats. This is currently done for select books at Wikibooks (educational, neutral point of view, not original research) and Wikisource (historically significant). I don’t know of a community for this sort of work on other classes of books, but I’d be happy to hear of such, and may eventually have to start doing it if not. Obvious candidate platforms include Mediawiki, Booktype, and source-repository-per-book.

You can register for the event (gratis) in order to help determine seating and refreshments. I expect the conversation to be considerably more wide ranging than the above might imply!