As a source of clinical information, how does Wikipedia differ from UpToDate or, for that matter, a textbook or scholarly journal? Wikipedia lacks three main things. First, a single responsible author, typically with a recognized academic affiliation, who acts as guarantor of the integrity of the work. Second, the careful eye of a trained editorial team, attuned to publication ethics, who ensure consistency and accuracy through the many iterations of an article from submission to publication. Third, formal peer review by at least one, and often many, experts who point out conflicts, errors, redundancies, or gaps. These form an accepted ground from which publication decisions can be made with confidence.

In this issue of Open Medicine, we are pleased to publish the first formally peer-reviewed and edited Wikipedia article. The clinical topic is dengue fever. It has been submitted by the author who has made the most changes, and who has designated 3 others who contributed most meaningfully. It has been peer reviewed by international experts in infectious disease, and by a series of editors at Open Medicine. It has been copy-edited and proofread; once published, it will be indexed in MEDLINE. Although by the time this editorial is read the Wikipedia article will have changed many times, there will be a link on the Wikipedia page that can take the viewer back to the peer-reviewed and published piece on the Open Medicine website. In a year’s time, the most responsible author will submit the changed piece to an indexed journal, so it can move through the same editorial process and continue to function as a valid, reliable, and evolving free and complete reference for everyone in the world. Although there may be a need for shorter, more focused clinical articles published elsewhere as this one expands, it is anticipated that the Wikipedia page on dengue will be a reference against which all others can be compared. While it might be decades before we see an end to dengue, perhaps the time and money saved on exhaustive, expensive, and redundant searches about what yet needs to be done will let us see that end sooner.

I love that this is taking Wikipedia and commons-based peer production into a challenging product area, which if wildly successful, could directly challenge and ultimately destroy the proprietary competition. The editorial notes:

Some institutions pay UpToDate hundreds of thousands of dollars per year for that sense of security. This has allowed Wolters Kluwer, the owners of UpToDate, to accrue annual revenues of hundreds of millions of dollars and to forecast continued double-digit growth as “market conditions for print journals and books … remain soft.” 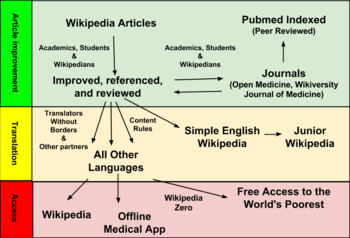 See the WikiProject Medicine collaborative publication page for more background on the process and future developments. Note at least 7 articles have been published in journal2wiki[pedia] fashion, see PLOS Computational Biology and corresponding Wikipedia articles. Ideally these 2 methods would converge on wiki↔journal, as the emphasized portion of the quote above seems to indicate.

Peer review of Wikipedia articles and publication in another venue in theory could minimize dependencies and maximize mutual benefit between expert authoring (which has historically failed in the wiki context, see Nupedia and Citizendium) and mass collaboration (see challenges noted by editorial above). But one such article only demonstrates the concept; we’ll see whether it becomes an important method, let alone market dominating one.

One small but embarrassing obstacle to wiki↔journal is license incompatibility. PLOS journals use CC-BY-4.0 (donor-only relative to following; the version isn’t important for this one) and Wikipedia CC-BY-SA-3.0 (recipient-only relative to previous…and following) and Open Medicine CC-BY-SA-2.5-Canada (donor-only relative to the immediately previous) — meaning if all contributors to the Dengue fever Wikipedia article did not sign off, the journal version is technically not in compliance with the upstream license. Clearly nobody should care about this second issue, except for license stewards, who should mitigate the problem going forward: all previous versions (2.0 or greater due to lack of a “later versions” provision in 1.0) of CC-BY-SA should be added to CC-BY-SA-4.0’s compatibility list, allowing contributions to go both ways. The first issue unfortunately cannot be addressed within the framework of current licenses (bidirectional use could be avoided, or contributors could all sign off, either of which would be outside the license framework).

Daniel Mietchen (who is a contributor to the aforementioned journal2wiki effort, and just about everything else relating to Wikipedia and Open Access) has another version of his proposal to open up research funding proposals up at the Knight News Challenge: Libraries site. Applaud and comment there if you like, as I do (endorsement of previous version).

Near the beginning of the above editorial:

New evidence pours in to the tune of 12 systematic reviews per day, and accumulating the information and then deciding how to incorporate it into one’s practice is an almost impossible task. A study published in BMJ showed that if one hoped to take account of all that has been published in the relatively small discipline of echocardiography, it would take 5 years of constant reading—by which point the reader would be a year behind.

A similar avalanche of publishing can be found in any academic discipline. It is conceivable that copyright helps, providing an incentive for services like UpToDate. My guess is that it gets in the way, both by propping up arrangements oriented toward pumping out individual articles, and by putting up barriers (the public license incompatibility mentioned above is inconsequential compared to the paywalled, umitigated copyright, and/or PDF-only case which dominates) to collaborative — human and machine — distillation of the states of the art. As I wrote about entertainment, do not pay copyright holders, for a good future.