Continuation headline on inside page:

Secretary of State Colin Powell took a stand Monday against any breakup of Ukraine, telling President Leonid Kuchma that it was important to keep the crisis-mired country intact.

In a telephone call to Kuchma, Powell said he was disturbed about reports of a possible splintering of Ukraine amid a volatile election dispute. He told reporters he asserted the U.S. stand on the country’s territorial integrity and his hope Ukraine would find a way to resolve its problems.

At the White House, presidential spokesman Scott McClellan called on the international community to unite in support of a peaceful, democratic process in Ukraine “and of Ukraine’s sovereignty, independence and territorial integrity.”

Why should anyone care whether Ukraine remains a single state? The election result map below makes it clear that if split, something like two thirds of voters would obtain their preferred outcome, versus half or less if the state’s “territorial integrity” is upheld. 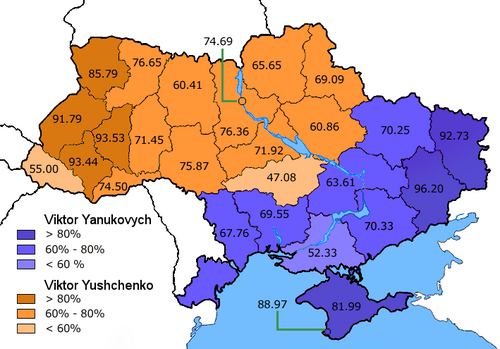 An opinion piece in the Kyviv Post argues against a split:

Have autonomy and separatism brought peace, stability and prosperity to Transdniester, Ossetia and Abkhazia? The answer, obviously, is no.

Those regions haven’t achieved de jure autonomy. If Moldava and Georgia set the regions free rather than agitating against separatism there would be hope for peace.

It’s time to stop thinking of nation states as sacred and inviolable entities that must be held together with violence in opposition to the wishes of inhabitants, and instead as service providers that must peacefully change and differentiate to best meet the needs of inhabitants.

There are many other nations, mostly artifacts of imperialism, that probably ought to split up, Iraq, Nigeria, and Sudan being “in the news” examples.

So long as freedom to live and work in all parts of the formerly unified state is maintained for all citizens of the smaller states, there need be no negatives for individual citizens, apart from a loss of irrational nationalistic feeling for the unified state, which will eventually transfer to the smaller states in those with the need for such feelings. I’d be happy to see the U.S. split into fifty separate countries under such terms.

Addendum: Mark Brady writes So what if Ukraine split?, citing some real gems from European “unity of the state” moralizers. Yushchenko, the supposed democrat:

Those people who will raise the issue of separatism will be held criminally responsible under the Ukrainian constitution.

[T]he unity of Ukraine is fundamental.

The sense of belonging to one nation is very important and on that basis a solution should be found.

I am reminded of the peaceful dissolution of Czechoslovakia into the Czech republic and Slovakia on January 1, 1993. Does anyone believe they should now be forcibly reunited?

Why no, that would further confuse the poor Czechs’ and Slovaks’ sense of belonging to one nation!