It’s been mildly amusing watching reactions in the blogosphere to yesterday’s NYT article on calorie restrction that used me as an example.

Both wild overstatements, though this reminds me — is there an age guessing site on the web, a la Hot or Not?

“Holy shit! That guy looks like he’s about to drop over dead!” You might guess that he has some kind of muscle-wasting disease. I know the angle of the photo isn’t flattering to a tall, long-limbed man, but perhaps the fact he’s sitting is appropriate. Honestly, he doesn’t look strong enough to stand.

And others like this. Yes, I can stand up, and so much more!

I did not realize how many bloggers copy and paste entire articles and call it a post. There are lots of them, not counting obvious spam blogs.

On the other side, CR blogger Mary Robinson has a reasonable critique:

I did not like Linksayer’s meals as an example. They are nice enough, but reinforce the stereotype that CR food is weird food. The text made it sound like he does not eat the same thing at all as the pictured food – he seems to eat a pretty normal regimen. So why show fermented soy for breakfast? My Fiber One and vegetable juice would have been less weird. Some yogurt and an orange would have been even better. I would like to have seen some fish in there for one meal. Maybe chicken at the other.

With a little more forethought I might have tried to prepare more mainstream meals. In my little bubble world, natto is normal. Regarding yogurt, fish, and chicken, I don’t eat them. I emphasized to the reporter many times that most people attempting CR are not vegan. If I had anything re-impressed on me from this article, it is that only a tiny bit of information can be squeezed into a news article.

The most satisfying blog commentary comes from Karen DeCoster:

Here is a photo of the disgusting Mr. Linksvayer: 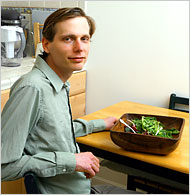 He’s more frail than blown glass, has a very stooped posture, and his body parts are not in proportion. In fact, upon seeing him, you immediately notice that he has taken on the physical appearance of one who suffers from mental retardation – which is typical for malnourished adults.
…
2,100 calories? That average day does not even approach 2,100 calories – you can do the math. This man is eating between 500-900 calories per day, that is, on the days that he does not starve himself fast.

I can see where DeCoster might get those numbers from the pictures, but as I mentioned in an earlier post, they leave out dessert and multiple servings of lunch and dinner.

But more than enough about me. DeCoster’s main argument:

First, a restricted calorie diet eats up gobs of human muscle, reduces metabolism, kills energy, destroys hair and skin and nails, numbs brain function, and depletes necessary nutrition to dangerously low levels. Only these pro-starvation crackpots would possibly claim that people on these nutbag diets can still get adequate vitamins, minerals, and overall nutrition. They claim that breaking down your body is, in essence, really “building it up” for the long run. Then, of course, we come to the call for government intervention in the aging process:

There would be some truth to this if one were to sharply restrict calories on a standard amurrican diet, or worse. This is just malnutrition. There’s a reason “we” (people practicing CR) do CRAN (CR with Adequate Nutrition) and aim for CRON (with Optimal Nutrition). In fact CR people get far more vitamins and minerals than the average person. As for destruction of hair, nails, brain, etc., nothing could be further from the truth. Aging breaks down the body. CR doesn’t build anyting up, it slows down the destruction, not least by nearly eliminating risk for major killers and disabilities like cancer, cardiovascular disease, diabetes, and alzheimer’s.

My suggestion to DeCoster is to do a bit of research and to follow Fight Aging for awhile. She’ll even appreciate that blog’s general skepticism of the usefulness of government funding, for example:

While in general I’m all for raising public awareness of any plasticity of the human lifespan, we’ve all seen the objections to the Longevity Dividend; it is unambitious and slow, setting the bar so low that the target gains will probably happen anyway. It is the sort of lowest common denominator big tent approach that gets politicians to spend tax dollars on inefficient ways forward while ignoring the real possibilities of doing far better.

I am particularly amused that DeCoster wrote on LewRockwell.com. I used to have a love/hate relationship with this and its sister site, Mises.org. Trenchant and extreme anti-war and anti-government commentary, including against intellectual protectionism. But the occasional Christian apologia, pro-apartheid writers, and general nuts really put me off. Then there’s the despicable Hoppe. Fortunately I am able to no longer care. There are many substitutes on the topics those sites were good on, and I am mostly convinced by Bryan Caplan on Austrian economics that the school does not just appear to be an ignorable backwater, it is. Part of Caplan’s conclusion reminds me yet again of the perils of meta:

Neoclassical economists go too far by purging meta-economics almost entirely, but there is certainly a reason to be suspicious of scholars who talk about economics without ever doing it.

To bring this ramble to a close, doing CR is definitely not meta.

Update 20061102: Cool, Reason too, with attitude and not much information. Others, at least check out the wikipedia article on CR and learn how to use the NYT link generator before posting. You’ll look a bit less stupid.