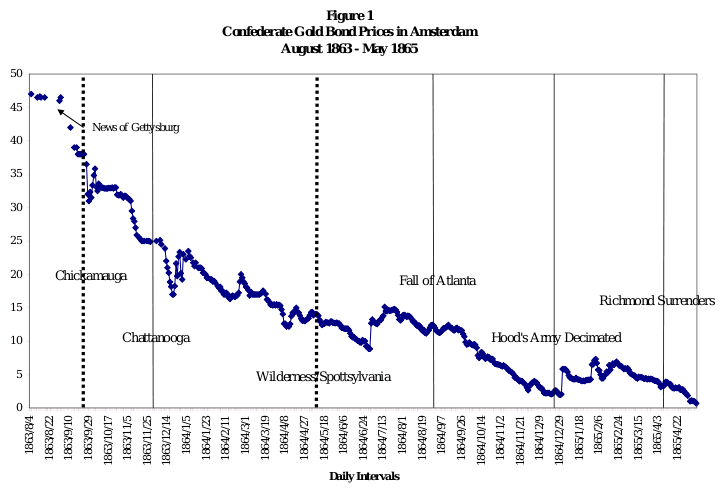 Did Johnny Reb have a Fighting Chance? A Probabilistic Assessment from European Financial Markets (PDF) by Kim Oosterlinck and Marc D. Weidenmier looks at Confederate gold bonds traded in Amsterdam from August 1863 through the end of the war, taking bond price (probability of repayment) as the probability of Confederate victory (meaning survival as an independent state that could service its debts).

A very interesting new window on history, one that is crying out to be applied to other situations were a government faces an existential threat, as the authors point out:

Although this study has focused on the American Civil War, the methodology employed in this paper could easily be applied to several other historical or modern day episodes to provide some insight into the evolution of victory probabilities during a period of civil war/revolution. The methodology might be particularly interesting to apply to a communist revolution given that Marxist regimes generally repudiate a country’s debt obligations and do not recognize international capital markets. For example, it might be interesting to know the evolution of victory (defeat) probabilities during the Spanish Civil War or the Cuban Revolution of the 1960s. Another possibility is to use the technique to estimate the probability that the thirteen colonies would win the American Revolution. The methodology could also be extended to estimate the probability of a victory by Germany during World War I or the Nazis during World War II. Applying the methodology to the world wars would be more complicated given that it is not clear whether the recovery value of the war bonds would be zero in the event of a defeat. We leave these items for future research.

What do bond prices say about contemporary Iraq? I don’t see any nice graph over time, but apparently current prices imply an 80% chance of default over the lifetime of one issue (through 2028), and apparently the “surge” hasn’t improved bond investor outlook.

Interesting, but survival of a government willing to repay past debts is way too coarse for most policy decisions and the probability of various policy decisions are not disaggregated. For these reasons prediction markets contingent on policy implementation and electoral outcomes are badly needed.