Yet Another Biaxial Political Spectrum 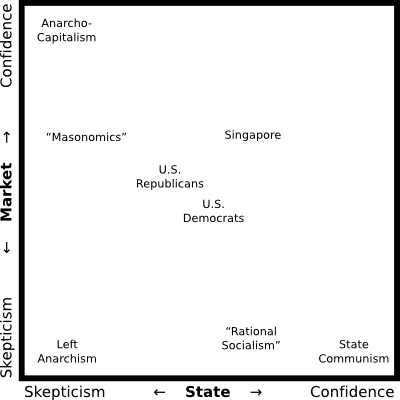 Thought of while microblogging (emphasis added):

As one moves toward increasing skepticism of both mechanisms, one might focus more on institutional design (wherein there is a huge space for exploration: two areas I’ve occasionally rambled about are commons and futarchy, both applicable to arrangements across state and market), as everything is broken and needs fixing. If one is much more skeptical about one mechanism than the other, one will assume the more confidence-inspiring mechanism will adequately check any problems of the other — e.g., so-called Masonomics:

At the University of Chicago, economists lean to the right of the economics profession. They are known for saying, in effect, “Markets work well. Use the market.”

At MIT and other bastions of mainstream economics, most economists are to the left of center but to the right of the academic community as a whole. These economists are known for saying, in effect, “Markets fail. Use government.”

Presumably the prototypical Masonomist on the above spectrum would be far on the left (extremely skeptical of the state) and in the middle (somewhat skeptical of markets), leading such a person to always favor market solutions (the state being a lost cause), with more emphasis on the design of market institutions than someone merely confident in the market and skeptical of the state might. Schools of socialism that roughly mirror Masonomics must exist — “Governments fail. Use government [carefully].” — I just don’t know their names, so I put “rational socialism” on the spectrum.

It seems that from many places on the spectrum, one might beneficially increase skepticism of one’s preferred mechanism, so as to focus on making that mechanism work better, and thus “win” more in the long term. Admittedly, this might seem an awful tradeoff for an activist focused on bashing (whatever they see as) evil in the short term. Further, one genuinely interested in improving the world as opposed to making ideological points might focus on improving mechanisms that make criticism and improvement of all mechanisms easier (nothing remotely new about this observation) — these are public goods that facilitate the provision of more public goods.

Completely coincidentally (noted while writing this post), David Nolan died today. His name is associated with a fairly well known biaxial political spectrum. Nolan also founded the strategically unsound U.S. Libertarian Party. If it mattered at all, and weren’t in bad taste, I’d suggest it die with him!