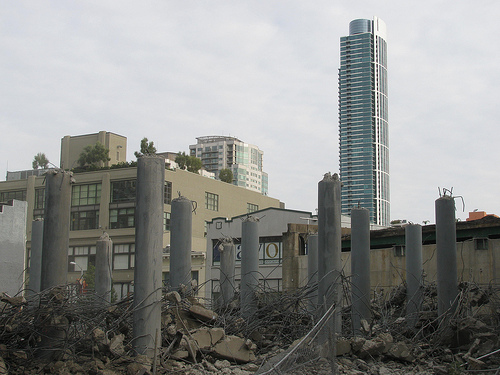 I took the above photo near the beginning of 2011. It has spent most of the year near the top (currently #2) of my photos hosted at Flickr ranked by their interestingness metric. Every other photo in the 200 they rank (sadly I don’t think anyone not logged in as me can see this list) has some combination of being on other people’s lists of favorites, comments, or large number of views. The above photo has none of that. Prior to this post it has only been viewed 33 times by other people, according to Flickr, and I don’t think that number has changed in some time. Their (not revealed) code must find something about the image itself interesting. Is their algorithm inaccurate? In any case the image is appropriate as the world of 2011 is ending, and in 2012 I absolutely will migrate my personal media hosting to something autonomous, as since last year someone (happens to be a friend and colleague) has taken on the mantle of building media sharing for the federated social web.

My employer’s office moved from San Francisco to Mountain View in April, contributing to a number of people leaving or transitioning out, which has been a bummer. I’ve been working exclusively from home since May. Still, there have been a number of good developments, which I won’t attempt to catalog here. My favorites include agreement with the Free Software Foundation regarding use of CC0 for public domain software, small improvements in the CC legal user interface, the return and great work of a previous colleague, retirement of two substandard licenses, research, and a global summit/launch of a process toward version 4.0 of the CC licenses, which I hope over the next year prove at least a little bit visionary, long-standing, and have some consideration for how they can make the world a better place.

Speaking of which, I’ve spent more time thinking about social science-y stuff in 2011 than I have in at least several years. I’ll probably have plenty to say regarding this on a range of topics next year, but for now I’ll state one narrow “professionally-related” conclusion: free/libre/open software/culture/etc advocates (me included) have done a wholly inadequate job of characterizing why our preferences matter, both to the general public and to specialists in every social science.

Apart from silly peeves, two moderate ideas unrelated to free/libre/open stuff that I first wrote about in 2011 and I expect I’ll continue to push for years to come: increasing the minimum age and education requirement for soldiers and tearing down highway 980.

I haven’t done much programming in several years, and not full time in about a decade. This has been making me feel like my brain is rotting, and contributes to my lack of prototyping various services that I want to exist. Though I’d been fiddling (that may be generous) with Scala for a couple years, I was never really super excited about tying myself to the JVM. I know and deeply respect lots of people who doing great things with Python, and I’ve occasionally used it for scripts over the past several years because of that, but it leaves me totally non-enthused. I’ve done enough programming in languages that are uglier but more or less the same, time for something new. For a couple months I’ve been learning Haskell and doing some prototyping using the Yesod web framework (apparently I had heard of Haskell in 2005 but I didn’t look at it closely until last year). I haven’t made as much progress as I’d like, mostly due to unrelated distractions. The biggest substantive hurdle has not been Haskell (and the concepts it stands for), but a lack of Yesod examples and documentation. This seems to be a common complaint. Yesod is rapidly moving to a 1.0 release, documentation is prioritized, and I expect to be really productive with it over the coming year. Thanks to the people who make Yesod and those who have been making Haskell for two decades.

This year I appreciated three music projects that I hadn’t paid much attention to before, much to my detriment: DNA, Moondog, and especially Harry Partch. I also listened a lot again to one of my favorite bands I discovered in college, Violence and the Sacred, which amazingly has released some of its catalog under the CC BY-SA license. Check them out!

Finally, in 2011 I had the pleasure of getting to know just a little bit some people working to make my neighborhood a better place, attending a conference with my sister, seeing one of my brothers start a new job and the other a new gallery, and with my wife of continuing to grow up (in that respect, the “better half” cliche definitely applies). Now for this world to end!