Last week Wikimania included a reception in an impressive hall at the Library of Congress. But far more impressive than the hall was the Gutenberg Bible on display, apparently one of a few complete vellum copies, and one of a few dozen known copies of any sort. I don’t recall ever feeling stunned to be in the presence of an artifact before.

After standing before the display case speechless for a bit, I read some explanatory text nearby:

Gutenberg’s invention of the mechanical printing press made it possible for the accumulated knowledge of the human race to become the common property of every person who knew how to read—an immense forward step in the emancipation of the human mind.

I can’t find a source for that text, but it has been on display for at least four years. It was incredibly apt for Wikimania, as it reads very much like the Wikimedia Foundation’s vision:

Imagine a world in which every single human being can freely share in the sum of all knowledge.

Wikimania provided plenty of evidence both for how rapidly Wikimedia projects are progressing (in particular technology projects that seemed fantasies a few years ago, such as Wikidata and a visual editor, will be deployed over the next year) but also how far away humanity is from the potentials expressed above — particularly driven by bad policy, which in turn impoverishes practice — resulting in Wikipedia being unique, when instead all knowledge of all forms could be subject to mass curation and sharing.

In case I do not blog further about Wikimania: I enjoyed helping Asheesh Laroia with the pre-conference hackathon, Mayo Fuster Morell with a BoF-style meetup on digital commons, and tons of great conversations. Thanks to the organizers, all attendees, and all Wikimedians for such a great conference and movement!

Perhaps someday I will stand in the presence of the Dunhuang Diamond Sutra, the oldest printed book with a date (868CE), held in the British Library. I don’t know whether it would stun me, but I have noted a statement in its colophon:

Reverently [caused to be] made for universal free distribution by Wang Jie on behalf of his two parents on the 13th of the 4th moon of the 9th year of Xiantong. 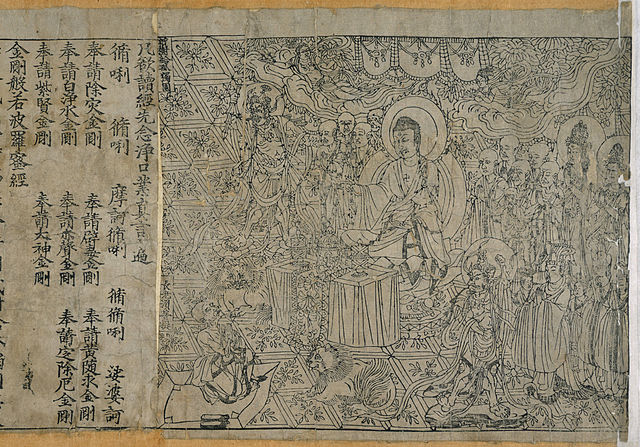