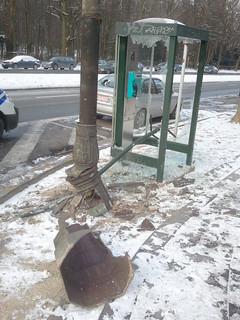 Late in the month but not post-deadline, the title of this month’s refutations of 8 year old posts indicates a decline in quality from the lows of 8 years and 1 month ago — surely death is better than deathless brokenness.

Bill Gates for Broken Windows assumes Gates spoke of global welfare rather than from the perspective of an entrepreneur. The latter is both more charitable and more probable given Gates’ history. If one wants to run a business which holds intellectual property and employs people, open source is not the most obvious path, and that was much more true in 2004 than now. I also extrapolated from Gates’ assumed global welfare statement to an assumed ridiculous scenario in which we’d be better off if all software created in the previous 10 years disappeared. Disregarding the fantastic nature of the scenario, it could be that forced obsolescence of software, such as that encouraged by proprietary product cycles and business failings, is for the long-term good — so that we are not stuck with old, crufty software only used because everyone else is using it. If Gates were making a long-term global welfare claim, he just may have been correct, at least for software — and I won’t even bother to criticize my criticism based on criticism of the broken windows fallacy criticism.

Perry Metzger stopped blogging 1.5 months after I wrote Perry Metzger’s Undiminished Capacity. This may be a refutation of a sort in itself, but more fundamentally I made the preposterous assumption that dispensing pearls of wisdom on mailing lists, Usenet, blogs (and now chickenfacepus) indicates any sort of capacity other than for masochism. While researching this refutation, I found two podcast episodes that Metzger appeared as a guest on. Below two very brief apropos excerpts (if you can’t play, view in Firefox ≥15, beta as of this writing; I’ve only saved an Opus encoding).