Life in the possibly bright future of the federated social indieweb

After about five years (2.5 year update) it’s hard not to be disappointed in the state of the federated social web. Legacy silos have only increased their dominance, abetting mass spying, and interop among federated social web experiments looks bleak (link on different topic, but analogous).

In hindsight it was disappointing 5 years ago that blogs and related (semweb 1.0?) technologies hadn’t formed the basis of the federated social web (my pet theory is that the failure is in part due to the separation of blog post/comment writing and feed reading).

Another way of looking at it is that despite negligible resources focused on the problem, much progress has been made in figuring out how to do the federated social web over the past five years. Essentially nothing recognizable as a social web application federated five years ago. There are now lots of experiments, and two of the pioneers have learned enough to determine a rewrite was necessary — Friendica→Red and the occasion for this post, StatusNet→pump.io.

Right now is a good time to try out a federated social web service (hosted elsewhere, or run your own instance) again, or for the first time:

My opinion, at the moment: pump.io has the brightest future, Diaspora appears the most featureful (inclusive of looking nice) to users, and Friendica is the best at federating with other systems. Also see a comparison of software and protocols for distributed social networking and the Federated Social Web W3C community group.

The Indie Web movement is complementary, and in small part might be seen as taking blog technologies and culture forward. When I eventually rebuild a personal site, or a new site for an organization, indieweb tools and practices will be my first point of reference. Their Publish (on your) Own Site, Syndicate Elsewhere and Publish Elsewhere, Syndicate (to your) Own Site concepts are powerful and practical, and I think what a lot of people want to start with from federated social web software. 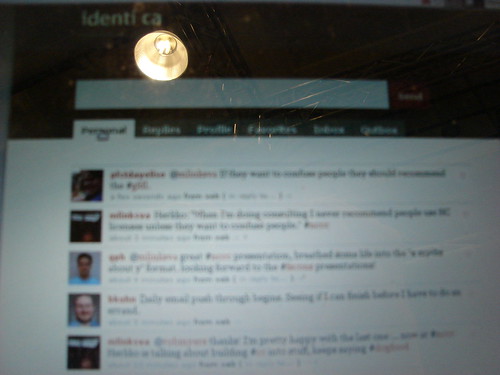 *Running StatusNet as I write, to be converted to pump.io over the next hours. The future of StatusNet is to be at GNU social.