9.5 years ago I wished for a prediction market aggregator. PredictWise gathers data from a handful of betting sites and publishes aggregated odds expressed as percentages, e.g., for the U.S. presidential election. PredictWise data is fairly easy to find and download at http://table-cache1.predictwise.com/(history|latest)/table_NNNN.json (view source of pages on the site to find NNNN’s of interest).

One calculation and graph made using this data: 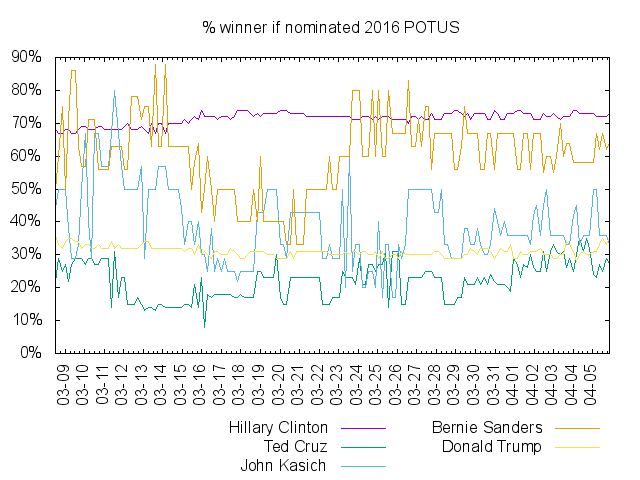 I could not figure out quickly how to tell gnuplot to add column averages to the column legend, so here they are — merely probability of becoming president divided by the probability of being nominated, averaged over the data most conveniently available, nearly a month:

Bettors seem to think a Democrat will probably win, and the more “mainstream” candidate of either party has a better chance than their same-party primary competitor(s), but I’d guess not by enough to convince a supporter of Cruz, Sanders, or Trump to supporter Clinton or Kasich, even in the unlikely event such a person’s faith that their preferred candidate is the most likely to be elected if nominated were shaken by betting prices.

I haven’t followed prediction markets closely in some years. I’d love pointers to other conditional outcome predictions, preferably bearing on broad, non-manipulable, and non-financialized social goals, rather than merely impact on the next horse race iteration.

If I learn of any, I may collect in a source repository.

In 2004 I wrote about markets and election outcomes and an update on Bush and terrorist stocks. In 2008 I sketched a futarchist voter guide with what very little data I could find.