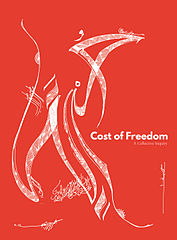 Today is Bassel Khartabil’s 35th birthday and his 1530th day of detention in Syria, and the 233rd day since he was moved to an unknown location, and not heard from since (previously: 1, 2, 3). Shortly after his disappearance last year I helped organize (CFP) a book sprint in his honor and calling for his freedom.

After a bit of copy editing and lots of formatting and format coversion the resulting volume, Cost of Freedom: A Collective Inquiry is now available for reading online and downloading, and in print.

I wrote a quasi-review of the book for the Creative Commons Taiwan newsletter:

The Cost of Freedom essays that work best are directly about Khartabil or about the broader costs of free knowledge movements. Barry Threw’s The Uncommon Creativity of Bassel Khartabil gives a sense of the personal and social moorings of the Free Bassel campaign … Several essays offer helpful criticisms of free knowledge movements, among them John Wilbanks’ Inside or Outside the Movement about the costs of internecine posturing, Giorgos Cheliotis’ The Shit of Freedom, a rant of love and frustration with movement participants “too busy working on your sales pitch, or curating your posse”, and Shauna Gordon-McKeon’s Free Culture in an Expensive World …

I also contributed an essay to the book, My Brain on Freedom, which begins:

Waiting…, a book by Bassel’s spouse Noura Ghazi Safadi, a Syrian human rights lawyer, is also available today in electronic and print formats. Both books are dedicated to the public domain with CC0-1.0.

Hopefully we will see Bassel’s release before his next birthday. Until then celebrate Bassel’s creativity and demand his release. These books are two of many projects with those aims: freebassel.org.