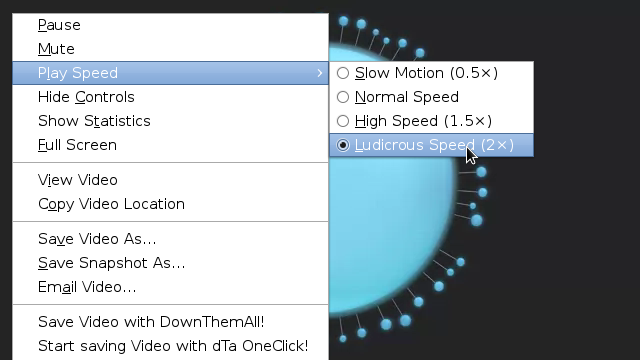 Listening or viewing non-fiction/non-art (eg lectures, presentations) at realtime speed is tiresome. I’ve long used rbpitch (but more control than I need or want) or VLC’s built-in playback speed menu (but mildly annoyed by “Faster” and “Faster (fine)”; would prefer to see exact rate) and am grateful that most videos on YouTube now feature a playback UI that allows playback at 1.5x or 2x speed. The UI I like the best so far is Coursera’s, which very prominently facilitates switching to 1.5x or 2x speed as well as up and down by 0.25x increments, and saving a per-course playback rate preference.

HTML5 audio and video unadorned with a customized UI (latter is what I’m seeing at YouTube and Coursera) is not everywhere, but it’s becoming more common, and probably will continue to as adding video or audio content to a page is now as easy as adding a non-moving image, at least if default playback UI in browsers is featureful. I hope for this outcome, as hosting site customizations often obscure functionality, eg by taking over the context menu (could browsers provide a way for users to always obtain the default context menu on demand?).

Last month I submitted a feature request for Firefox to support changing playback speed in the default UI, and I’m really happy with the response. The feature is now available in nightly builds (which are non-scary; I’ve run nothing else for a long time; they just auto-update approximately daily, include all the latest improvements, and in my experience are as stable as releases, which these days means very stable) and should be available in a general release in approximately 18-24 weeks. You can test the feature on the page the screenshot above is from; note it will work on some of the videos, but for others the host has hijacked the context menu. Or something that really benefits from 2x speed (which is not at all ludicrous; it’s my normal speed for lectures and presentations that I’m paying close attention to).

Even better, the request was almost immediately triaged as a “[good first bug]” and assigned a mentor (Jared Wein) who provided some strong hints as to what would need to be done, so strong that I was motivated to set up a Firefox development environment (mostly well documented and easy; the only problem I had was figuring out which of the various test harnesses available to test Firefox in various ways was the right one to run my tests) and get an unpolished version of the feature working for myself. I stopped when darkowlzz indicated interest, and it was fun to watch darkolzz, Jared, and a couple others interact over the next few weeks to develop a production-ready version of the feature. Thank you Jared and darkowlzz! (While looking for links for each, I noticed Jared posted about the new feature, check that out!)

Kodus also to Mozilla for having a solid easy bug and mentoring process in place. I doubt I’ll ever contribute anything non-trivial, but the next time I get around to making a simple feature request, I’ll be much more likely to think about attempting a solution myself. It’s fairly common now for projects have at least tag easy bugs; OpenHatch aggregates many of those. I’m not sure how common mentored bugs are.

I also lucked out in that support for setting playback rate from javascript had recently been implemented in Firefox. Also see documentation for the javascript API for HTML5 media elements and what browser versions implement each.

Back to playback rate, I’d really like to see anything that provides an interface to playing timed media to facilitate changing playback rate. Anything else is a huge waste of users’ time and attention. A user preference for playback rate (which might be as simple as always using the last rate, or as complicated as a user-specified calculation based on source and other metadata) would be a nice bonus.