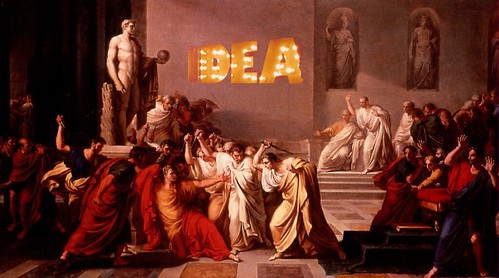 I’ve already covered the main idea of Creative Commons Search, useful to me but here I’ll just restate that license filtered crawl-based search has not turned out to be useful to me, except as a demo. On the other hand, license filtered media/repository-specific search has proven useful (that’s what most of the search options currently on search.creativecommons.org do), and it’s plausible that crawl- or at least some form of aggregation-based search that takes into account finer grained metadata could effectively perform the same useful service. I also must question the utility of search for finding works for using and sharing: unless one is looking for something representative (e.g., a picture of a rose, a foreboding audio track) the finding is more likely to occur through curation, recommendation, marketing, advertising. “Search” has taken up too much oxygen. Finally, why bother limiting one’s discovery, use, and sharing based on internal passport parameters? The copyright industries and advocates don’t; why should you or I and our communities?

クリエイティブ・コモンズ (Creative Commons) mentioned the availability of “Creative Commons license ports to Japanese law” which is an accurate description, but what does it mean? I won’t answer that directly here, but an effect has been massive license proliferation (560 distinct licenses!) and mistakes — including in the 2.0 Japan licenses mentioned — version 2.1 Japan licenses exist, and version 2.1 was only used for a few “ports” in order to correct errors.

DirectConnect increment[al download verification]: My lack of interest in Direct Connect (which seems still active) was indicative of a fetish for fully decentralized schemes (DC has distinct hubs and clients). Client-server (the web) has won, without even P2P downloading, which DC had, and THEX constituted an improvement to. Hash trees have found use in ever more applications, it just turns out that improved downloading of crap isn’t one of the significant ones.

Client-side remixing isn’t so loopy also evinces a wildly impractical fetish for a kind of decentralization. Copies are cheap and work, coordination of references is expensive and broken.

Hello Austin, Night of Bowed Strings and Cambodian Surf, Texas Alien Abductions Up After Chunnel Completion, CC-Austin, and Walking Austin all concern a visit to Austin, Texas for SXSW. All make it apparent I did exactly what I enjoy, rather than what SXSW might be good for: networking. The “Music Sharing License” introduced there was a confusing name that fortunately has been forgotten. “Remix Ready” and “4th Wall Films” ideas to make “source” for cultural works available are ones that I liked and a concept I continue to advocate. However, clearly there is very little demand for the concept, perhaps for three reasons 1) it often isn’t clear what constitutes source 2) providing source, or even retaining it as one works (often destructively — the silly image at the top of this post is an example — I forgot to save .xcf files, but I did save two .png files for some reason, which is better than I’d usually do) is often expensive and 3) final published works have some usefulness as source. Finally regarding a panel on CC and music: clearly public licenses are neither necessary for distributing music online nor sufficient for engendering creative use and peer production of cultural relevance.

WikiTravel vs. World66: WikiTravel wins more concerns copying text between those two sites, which used the same license, in theory making such copying legal and easy. But such copying occurs constantly with no license and no knowledge of such. And I didn’t even comply with the license conditions, if it were necessary (no attribution or license notice added).